is a portrait of a culture. I read it to get insight into the Nazification of Germany from a ground level view. Waln, a Quaker pacifist, and her husband moved to Germany for his musical studies. They had extended visits throughout Germany, Austria and Czechoslovakia.

Much about the culture was winsome. Here, regarding music:

It was usual to see people whose hands were callous with toil playing musical instruments. No gathering was without its song. They scattered music over their great river, over their wine-clad hills, and along their forest ways. (p.53)

I had entered Germany with the feeling that these people had no money for luxuries, and I had not yet learned that among vast numbers of them a book is not counted a luxury. I had never heard anyone express surprise on learning that a person had gone without meals or material things to buy a book. (p.118)

By far, my favorites passages were about the vineyards. If you’ve read Wendell Berry you will appreciate this. There were pages about tending vines, cultivating soil:

A vineyard keeper worthy of his title has his wood lot for poles, his field for potatoes, his orchard of fruit trees, his stabled cows, his dwelling house, and his vines. He eats bread of his wife’s making which is baked in the village oven, and the fire is banked over Sunday. His laundry is rubbed clean at home, rinsed in the clear waters of the Ahr, and bleached on the grass. He walks without arrogance but with self-respecting dignity. And, Protestant or Catholic, he brings his children up to earn their keep, pay their debts, revere God, and love the Fatherland. (p.151)

The Germans build well. The roads are not ugly scars across their land they are things of beauty, exciting in their charm. They are invisible a short distance off; then one comes on them—silver ribbons. No telegraph poles, advertisements, rows of refreshment stands, gasoline stations, or ugly houses line their banks. (p.138)

I learned about a cathedral to Saint Stephan in Vienna, the “Stefansdom”.

The Stefansdom has been raised in the same way [as Mongolian prayer mounds]. It is a heap of gifts to God. Each generation has made its offering in the fashion of the time—Romanesque, Gothic, baroque, and nineteenth century. Each piece is beautiful. (p.263)

But then she describes Hitler’s rule. It was impossible for a young boy to escape being in Hitler’s Youth. While they were often given extra latitude (Hitler had read and enjoyed a previous book Waln wrote) they saw the troubles their friends experienced. Soldiers were optimistic and accepted injustices to themselves with a spirited defense of the army.

One story about a Christmas dinner captured me. The hosts guests included  Christians of Jewish descent. The maid and butler made a brouhaha, refused to serve the Jews, and quit in the middle of service. The hosts refused to let their friends leave and carried on amidst their own embarrassment.
Waln said that she was so traumatized in 1938 that she was unable to write.

I’m glad I read this book. Most of my questions weren’t answered, but one thing was clear. Most citizens were in denial as they gave up freedoms one by one. 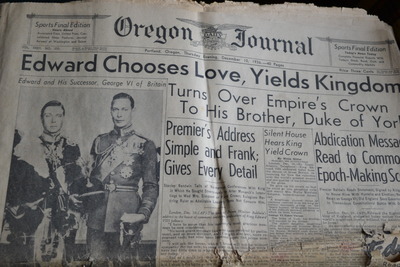 Because we loved The King’s Speech

, my husband knew
I would enjoy reading the December 10, 1936 edition of the Oregon Journal. 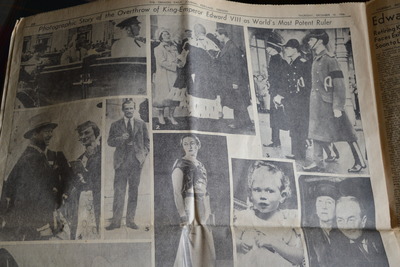 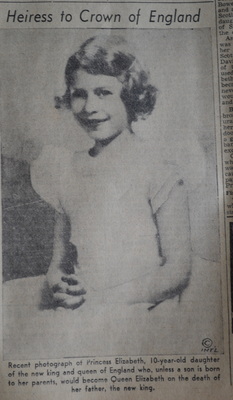 The “Queen-Apparent” Elizabeth received her share of the focus.
The 10-year-old’s newest accomplishment was climbing trees.

She is beginning to understand the mottowhich her mother taught her almost assoon as she could talk–“duty first, self second.”
I wonder how Kate Middleton’s experience compares to the Queen Mum’s:

Her final love match with Albert and his acceptancemeant the beginning of a period of hard work for her.Every morning at 6:30 Lady Elizabeth arose and spentan hour studying private books dealing with the historyof the royal family, reading works on the the constitutionand other matters. At Buckingham palace each day shewas taught all the important anglesof precedent, formality and dress. 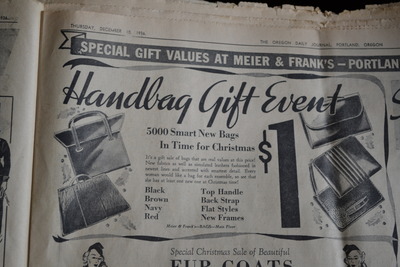 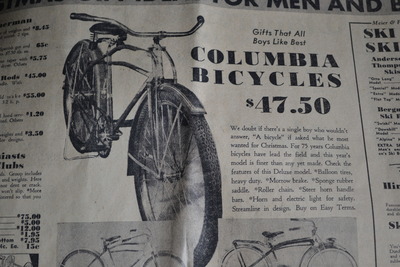 A new Ford V-8 with decidedly increased gasoline mileage as low as $480!

And United Air Lines can fly you from Portland to Chicago overnight,
to New York in 13 hours, Washington in 17 ½ hours!
5 flights daily! 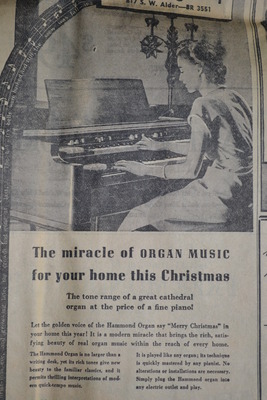 Home organs were la-de-da!
Do any of you know of a home organ that is being played now?

Ever curious, I went online to see what happened to Wallis, Duchess of Windsor.

She is said to have summed up her life in one sentence:
“You have no idea how hard it is to live out a great romance.“