Within five weeks I went from an island in the Pacific Ocean to an island in the Atlantic Ocean! First my husband and I celebrated our 40th anniversary with a trip to Victoria, British Columbia.

Back in the spring, our next-door neighbors invited us over for supper. While talking, we realized that both couples got married in 1978. Our friend grinned, declared he was taking his wife to Italy for their 40th, and pressed his point: how were we planning to celebrate ours? Well, my lovely husband stalled, we were thinking about Canada. It was all I could do not to swivel and stare. Oh, Canada! Yessss!

It turned out we arrived on Canada Day. Thousands of folk in the streets. A giant block party. Vendors, musicians, artists, mimes, bands, orators, food, dancing, throngs. A sea of people ebbed and flowed. We enjoyed the celebration, Butchart Gardens, museums, monuments, and cathedrals. And just being together in a romantic place. 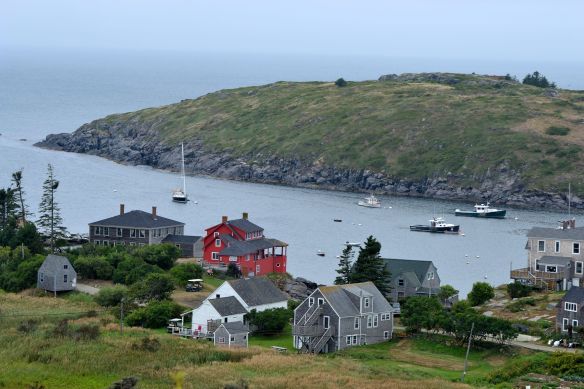 In August, my sister Dorothy and I traveled to Maine to visit our brother and sister (in-law). We were eager to visit Jim and Kathie’s favorite spot, an island ten miles off the coast. Monhegan. We enjoyed the quiet punctuated by seagulls’ laughter; gardens, galleries, a museum, shops, and the little community church. And just sharing sibling time in a transcendent space.

Sea to shining sea. That reminds me of what my brother Dan says about pitching congregational songs too high to sing. C to shining C!

Photo taken from Iona, a small — but important — island on the western coast of Scotland.

The second best thing? This book is $.99 on Kindle today.

My first response to The Blue Castle

was to draw back from the despair. Lucy Maud! How can you? Because, you see, Anne, the Green Gables girl, had a tough beginning in life and Emily, the New Moon girl, was hurt by horrible aunts and uncles; *but* both Anne and Emily knew she was cherished by her late mother and father.

Valancy Stirling has a mother—alive and kicking—who is overbearing, suffocating, domineering, disrespectful, and mean. We meet Valancy on her 29th birthday, shamed and teased because she hasn’t married. Life has no flavor, living is a grim prospect.

Valancy escapes her horrid little life by fantasizing about living in a Blue Castle in Spain, where beauty adorns her, women admire her and men adore her.

Valance becomes aware of a piece of information, a secret from the family; she throws off her bondage and inhibitions and forthwith says and does what she desires. Her family is shocked—shocked!—and thinks Valancy might suffer from mental illness.

The plot takes some twists and turns, and Valancy ends up living her life of paradise on an island on a lake. L.M. Montgomery includes her hallmark descriptions of the seasons.

They went for long tramps through the exquisite reticence of winter woods and the silver jungles of frosted trees, and found loveliness everywhere.

I am torn by this book. I can’t help but holler hallelujah! when she leaves her loveless family. Happy Independence Day! The happiness she finds is, however, very private, very insular. I doubt that life can be so fulfilling when lived without community. I’m not a fan of what Valancy says about living life to please herself…whoo, boy, that’s a recipe for misery. But I love the compassion she shows to a single mother shunned by society.

I laughed aloud at the imitation swearing comment. A reference that made me snort but will only be caught by those who know old hymns. Maud surely knows how to make fun.

…had her moles removed by electrolysis—which Aunt Mildred thought was a wicked evasion of the puposes of God.

“There are things worse than death,” said Uncle James, believing that it was the first time in the world that such statement had been made.

Valancy lived with me for many days after I finished the book, a sign of a good read.

When Hope at Worthwhile Books reviewed Elizabeth Goudge’s first novel, I wanted to read it.  The setting is St. Pierre, the capital of Guernsey, a channel island between England and France. Island Magic quenches two of my current fascinations: island culture and late 19th century rural life.

André and Rachell du Frocq are barely eeking out a living on a farm called Bon Repos (“Good Rest” or, as I like to translate it, “Sweet Tranquility”), a place that comes with a benediction written on stone outside the farmhouse:

The characters of André, Rachell, their five children, Grandpapa, and the stranger Ranulph— who is taken in after a shipwreck—, are vivid and unique; they linger in my thoughts days after I finished the book. Among the five siblings are a humanitarian, a poet, a failed academic, an adventurer, and a joyspring.

The story is sad and yet not without hope. The children have individual minor tragedies, they also have the confidence and security of being part of a bustling family. The tension resides between husband and wife as they begin to think about conceding failure at farming. The stranger’s assistance is helping the bottom line, but brings more marital conflict.

Typical of Goudge, there is a fairy element in the story. Themes of faith, bitterness, the value of beauty, hard work, service, gratitude, grief and sacrifice make the story shimmer. One point of the plot beggars belief. Of course I can’t identify it without giving away part of the story.

Rarely—and happily— I come across a sentence, with which I can fully relate, and about something I’ve never before seen in literature. Island Magic delivered! This used to be me!!

How thankful she was for her one great gift—the gift of making her nose bleed at will.

Here is a great Christmas quote:

Christmas Day at Bon Repos was something terrific. The du Frocqs took the whole of December preparing for it and the whole of January recovering from it.

Goudge’s mother was a native of Guernsey; summer visits to the grandparents were part of Goudge’s childhood. Her final thoughts on island living in this book are a bit idealistic, but they reflect some of the necessities of interpersonal relationships in a closed society.

You can’t be an individualist on our Island. There’s so much magic packed into so small a space. With the sea flung round us and holding us so tightly we are all thrown into each other’s arms—souls and seasons and birds and flowers and running water. People understand unity who live on an island. And peace. Unity is such peace.