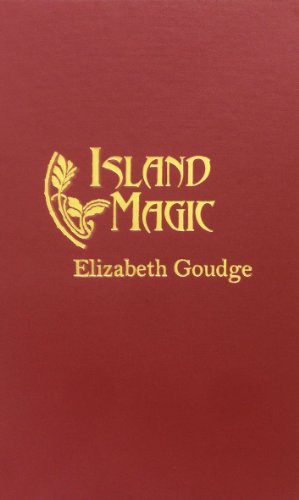 When Hope at Worthwhile Books reviewed Elizabeth Goudge’s first novel, I wanted to read it.  The setting is St. Pierre, the capital of Guernsey, a channel island between England and France. Island Magic quenches two of my current fascinations: island culture and late 19th century rural life.

André and Rachell du Frocq are barely eeking out a living on a farm called Bon Repos (“Good Rest” or, as I like to translate it, “Sweet Tranquility”), a place that comes with a benediction written on stone outside the farmhouse:

The characters of André, Rachell, their five children, Grandpapa, and the stranger Ranulph— who is taken in after a shipwreck—, are vivid and unique; they linger in my thoughts days after I finished the book. Among the five siblings are a humanitarian, a poet, a failed academic, an adventurer, and a joyspring.

The story is sad and yet not without hope. The children have individual minor tragedies, they also have the confidence and security of being part of a bustling family. The tension resides between husband and wife as they begin to think about conceding failure at farming. The stranger’s assistance is helping the bottom line, but brings more marital conflict.

Typical of Goudge, there is a fairy element in the story. Themes of faith, bitterness, the value of beauty, hard work, service, gratitude, grief and sacrifice make the story shimmer. One point of the plot beggars belief. Of course I can’t identify it without giving away part of the story.

Rarely—and happily— I come across a sentence, with which I can fully relate, and about something I’ve never before seen in literature. Island Magic delivered! This used to be me!!

How thankful she was for her one great gift—the gift of making her nose bleed at will.

Here is a great Christmas quote:

Christmas Day at Bon Repos was something terrific. The du Frocqs took the whole of December preparing for it and the whole of January recovering from it.

Goudge’s mother was a native of Guernsey; summer visits to the grandparents were part of Goudge’s childhood. Her final thoughts on island living in this book are a bit idealistic, but they reflect some of the necessities of interpersonal relationships in a closed society.

You can’t be an individualist on our Island. There’s so much magic packed into so small a space. With the sea flung round us and holding us so tightly we are all thrown into each other’s arms—souls and seasons and birds and flowers and running water. People understand unity who live on an island. And peace. Unity is such peace.