From this year’s journal, for the patient and curious reader:

GPS sets us in the center of the map and then makes the world circulate around us. In this miniature parody of the pre-Copernican universe…  —The Glass Cage

If your husband knows you love and want him, you empower him in every other area. —For the Love

Grief is a strange thing. —A Man Called Ove

What I always say is, God sends the weather and it’s not for us to grumble. —Shoulder the Sky

Without habit, the beauty of the world would overwhelm us. We’d pass out every time we saw—actually saw—a flower. —Four Seasons in Rome

Alex now saw that his relationship with his father was the taproot of his character and temperament. —The Father’s Tale

Life is like a bog. If you stand still too long your feet begin to sink into the mud. —Anna and Her Daughters

I was learning that when you’re with someone who is dying, you may need to celebrate the past, live the present, and mourn the future all at the same time. —End of Your Life Book Club

Cilantro, Satan’s own herb (I disagree, but I laughed!) —The Pat Conroy Cookbook

There are no billboards in Iceland. — Iceland: Land of the Sagas

In teaching your child, do not forget that suffering is good too. — A Tree Grows in Brooklyn

The disappearance of tools from our common education is the first step toward a wider ignorance of the world of artifacts we inhabit. — Shop Class as Soulcraft

A French study released in 2013 even found a solid link between continued work and avoidance of dementia. — Get What’s Yours (Maxing out Social Security)

…ecologies of attention… — The World Beyond Your Head

Today, a whole generation has grown up as a take-out culture. The food is convenient, and some of it is even good, but it has none of the ring of the familiar; it can never be personal enough to become part of our past. — Christopher Kimball

Talkers never write. They go on talking. — Parnassus on Wheels

For poems are not words, after all, but fires for the cold, ropes let down to the lost, something as necessary as bread in the pockets of the hungry. Yes, indeed. — A Poetry Handbook

MARTIAL is an anagram for MARITAL. — The Spectator Bird

I’ve seen far too many people awash in genuine desire to change only to lose their mettle when they realized just how difficult change actually is. — Hillbilly Elegy

Time used to tumble for me. Time was narrow, then, and very fast. Now time has widened. — Letters from the Land of Cancer

Serendipity
is one of my favorite words.
My definition: finding something wonderful that you weren’t looking for.

One of the most splendid serendipitous events of my life took place on Monday night.

I was packing for a trip to Chicago to see my family and friends. I had inherited my Aunt Betty’s photograph album. She died in July near Cape Town, South Africa. She never had children; her friend wanted to send her few personal effects to a family member and asked me if I wanted them. Of course, I replied. When the packages arrived there were two paintings, some brooches, a cross-stitch I had done for her, and a photo album.

I was interested in seeing pictures of my grandpa and grandma, Aunt Betty, Jean-Blaise—my Congolese cousin (my aunt’s foster son)—, and dear Virginia who was my aunt’s best friend. My aunt survived three husbands and I couldn’t distinguish #1, #2 and #3 in the pictures. Obviously, I didn’t pore over each picture. My life was full when the packages arrived; I remember enjoying the photos and setting them on a shelf.

When I was picking pictures to bring with me on the trip, there were a few bunched up underneath another photo. I drew one out and saw Aunt Betty pushing a stroller with two toddlers: my oldest sister and brother. She had come to help out my mom.

The next picture was my mom holding a baby. I turned it over and read, “Nellie and Carol Ruth, 3 months.” Electricity sluiced through my body. There was my mom. And there was me.  I have never seen a picture of me as a baby. I didn’t think one existed. One of the hazards of being a seventh born.

The next photo was just overload. I was stunned. The date down the vertical margin was MAR 55. Elisabeth Elliot holding Valerie with Jim Elliot next to her. I don’t know where this picture was taken. Or why my aunt had it. Two possibilities exist. 1) Aunt Betty was a classmate of Betty Howard (aka EE) at a girls boarding school in Florida. But I never got the impression from Aunt Betty that they were particularly close. 2) Jim Elliot and my grandpa were close friends during his time at Wheaton. Perhaps my grandpa was the original recipient of the photo and my aunt inherited it after Grandpa and Grandma died?

Who took the Elliot family photo? These scans don’t show it, but both pictures are the same size with the same border. This will take some research. 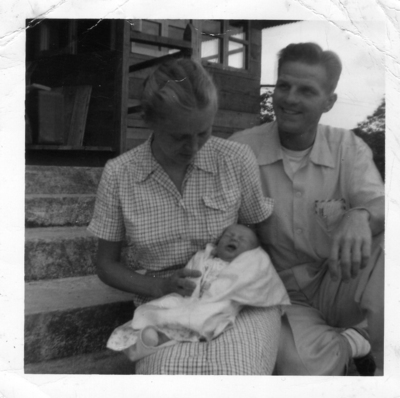 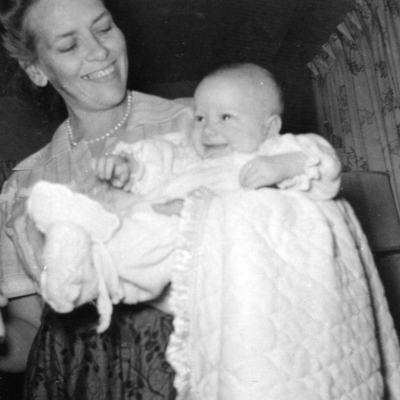 I love spending time finding the right word, the word that best fits the need. But, gentle reader, I am flummoxed and befuddled. To articulate the treasure that I have been given requires words I don’t yet know. I do know this: I am forever thankful. Thank you Aunt Betty, for saving a piece of my history. Thank you Virginia, for ensuring these treasures weren’t thrown away. Thank you, Almighty God, from Whom all blessings flow. 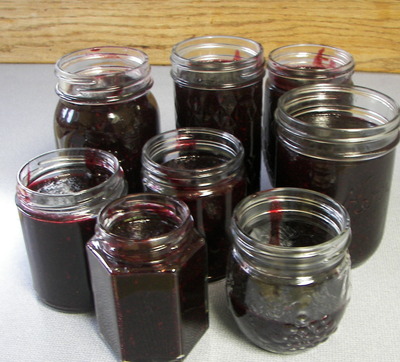 Every year our close-knit community of faith meets at a cabin near Imnaha, Oregon.
It’s a day of rest. 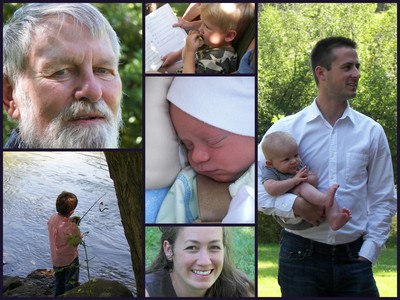 We worship, talk, eat, sing, play, and…rest!
These are my people. 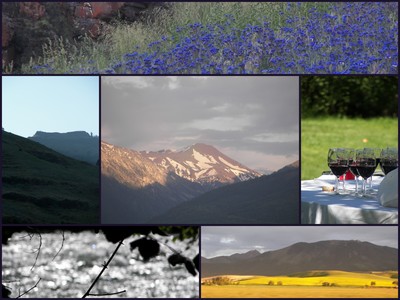 This is what my eyes saw today. 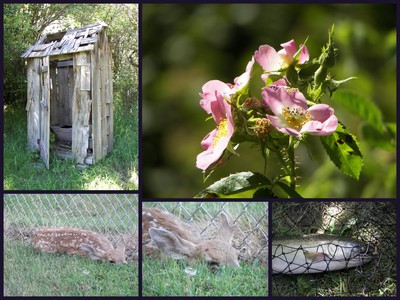 A fawn, a flower, a salmon, a discontinued outhouse.
Not pictured: a golden eagle hitchhiking on the side of the road.
We stopped to offer a lift, but he took off on his own. 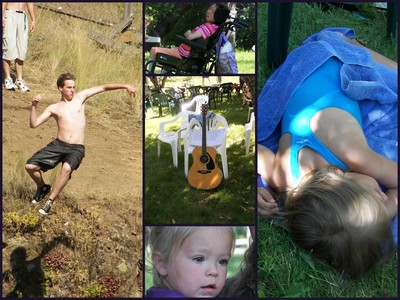 Cliff-jumping into the river or catching some winks: good times! 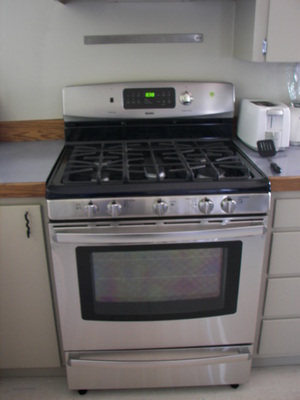 When my new doctor entered the exam room, she caught me in the act of writing in my journal.  In her lovely Southern drawl, she peppered me with questions, one of which was “Have you published?”

“Really?” with the inflection going down, she made it sound like she really! was interested.  “What do you blog about?”

The answer, my friend, was most definitely not….appliances.

A stove is a banal topic, I grant you.  Ho. Hum.  But, when 1982 was the last time one has purchased a new major appliance it’s a big deal!  And I’m happy to tell you I love my new gas stove.  I love the crackling sound when you first turn a burner on, I love the flame that bursts forth, I love the control of fine-tuning the size of the flame, I love to sauté, I love to braise, I love to bake, I love to cook.

Instead of four elements, I now have five burners.  Instead of three rack placements in the oven, I now have five.  I. have. a. warming. oven. (Never mind that I don’t know what to do with it yet.)  Color me happy!

And the best thing about this exchange?  Since our friend came and took the old (non-self cleaning) stove for scrap metal, I didn’t have to clean it!  Booyah! 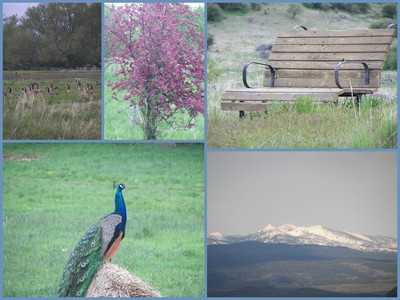 An evening picnic at Ladd Marsh.
(Hey Danny: Curt saw a bittern)
A pair of Sandhill Cranes with a little one.
Turkey, pheasant, geese, ducks, blackbirds, elk, deer.
Gyros sandwich for him; gyros salad for me.
Lovely. 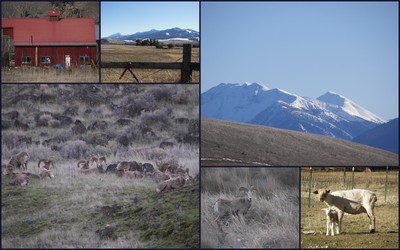 Diamond days.
Rams, lambs, llamas, geese.
A bald eagle convention.
Bracing cold and piercing bright.
Grace multiplied.
Newborn babes with rosebud mouths.
Singing that carries you to heaven.
A grand slam sermon.
My husband, a car and a country road.
A cup of chai to go with sunset.
A heart quaffing mercies,
attempting to print these wonders
permanently in my memory. 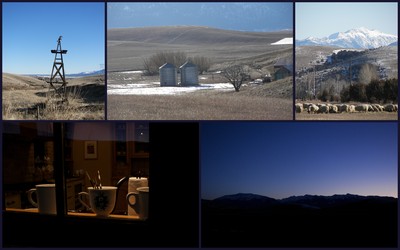 O taste and see that the Lord is good.

A Living Pencil
Create a free website or blog at WordPress.com.