“I am so sorry I didn’t pursue a career. In the end it is meaningful work—serving people—that matters most. It is what we are made for.”         — Miriam B. Reichl

I stumbled onto Ruth Reichl (RYE-shell) browsing the stacks at my local library. Her voice captured me, her stories engaged me. One by one, I read her memoirs

, trying a few recipes tucked in at chapter ends. You could say that she opened the door and welcomed me into the foodie world. I’m still standing in the vestibule, not sure if I belong here, but it is fun looking around.

August and September are months when I listen to audio books by the dozen while I put up food from the garden. I was delighted to rediscover Ruth Reichl and quickly downloaded Not Becoming My Mother: and Other Things She Taught Me Along the Way

. (The title changed to For You Mom, Finally

when it was issued in paperback.)

Reichl interprets her mother’s life through the lens of family letters and private notes found after her mom’s death. Miriam (“Mim”) was remarkable: got a PhD in music from Paris when she was nineteen, opened a bookshop in her twenties, formed friendships with famous authors, critics, musicians. Thwarted from becoming a physician, told that she was too homely to attract a husband, bereaved of her sister, a disappointment to her parents, she carries an “unhappiness that is palpable”, sits through years of psychotherapy, tries pharmacotherapy, alienates her kids, spirals into deep depression. 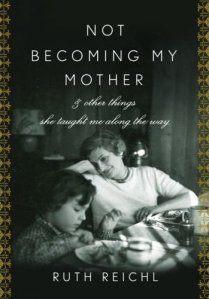 Mim’s misery, Reichl insists, stems from the fact that she lacked a career. In the fifties she was one of the smart, competent women twiddling their thumbs. She hated housework, was a dangerous cook, lived in chaos. Out of her extraordinary generosity, the best gift she gave her daughter was permission to defy her. Well, now.

While the sadness clings, I just don’t buy the message. My opinion? Mim was miserable. If she had had a career she still would have been an unhappy career woman.

I applaud when Ruth Reichl in another context says “I don’t think there’s one thing more important you can do for your kids than have family dinner.”  But she strikes out with this book.