I knew that the little town of Aberfeldy, our home base in Scotland, had a bookshop in a converted watermill.

Within walking distance of our temporary home.

Go to the Link and click on the Virtual Tour.

The kindness of our God is overwhelming.

My lips are numb. 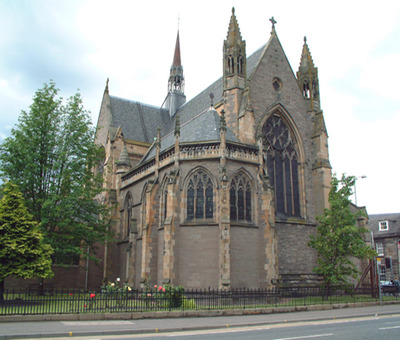 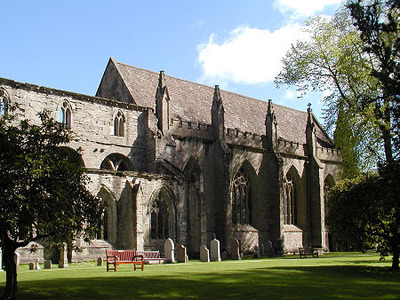 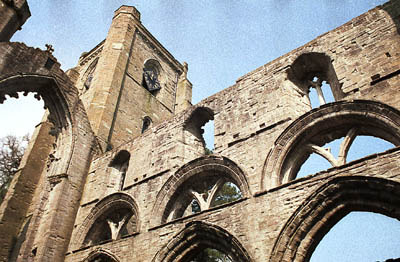 I think these are the ruins of Elgin Cathedral. 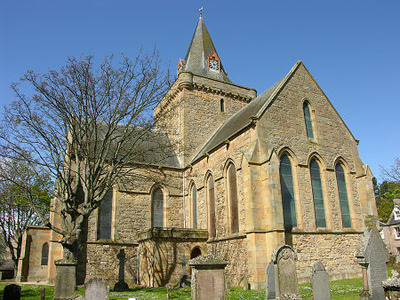 Dornoch Cathedral (this link is worth checking out), Church of Scotland
during the day (above) & at night (below).  For another post:
I liked when the church was the resting place for the dead.
It reinforces the idea of communion of the saints
and helps us to remember those who have gone before. 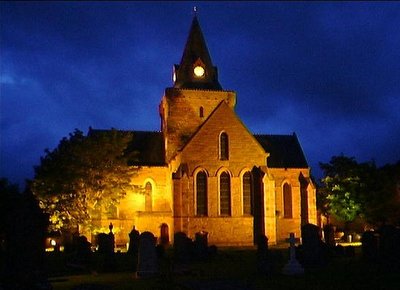 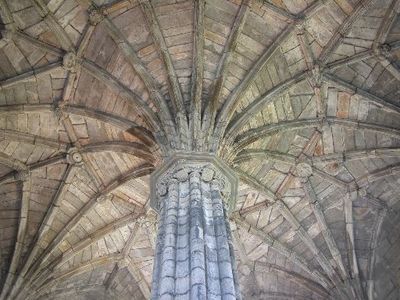 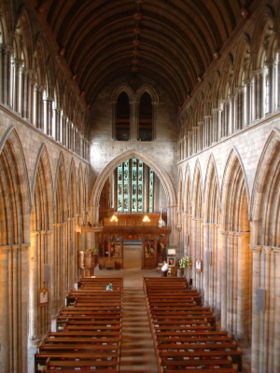 Dunblane Cathedral, Church of Scotland
The nave of a church is the central approach to the high altar.
It comes from the Latin word navis (ship).
Look at the top of the picture at the vaulting.
Doesn’t that look like the keel of a ship?

These are just a few of the architectural gems
we hope to see in Scotland.
I am eager to learn more about cathedrals,
abbeys, old kirks, manses, and monasteries.
My lips are numb. 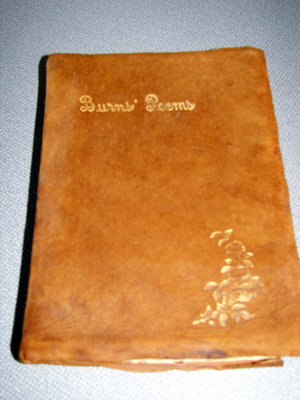 If we were in Scotland tonight, we’d go to a Burns Supper.

Selkirk Grace
Some hae meat and cannot eat.
Some cannot eat that want it.
But we hae meat and we can eat,
Sae let the Lord be thankkit.
Listen to this Real Audio read by Peter D. Wright
~ I think that is what I’m most looking forward to: daily doses of Scottish brogue!

Forgive me if I get a bit excessive.  How does one limit oneself to one poem of Burns? Here are excerpts from some of my favorites. 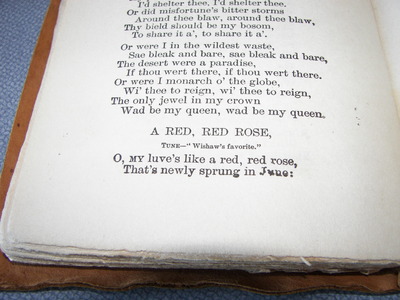 from To A Mouse

from Winter (A Dirge)

The wintry west extends his blast,
And hail and rain does blaw:
Or, the stormy north sends driving forth,
The blinding sleet and snaw:

from Address to the Unco Guid, or the Rigidly Righteous

O Ye wha are sae guid yoursel,
Sae pious and sae holy,
Ye’ve nought to do but mark and tell
Your neebor’s fauts and folly!

My mirth and guid humor are coin in my pouch,
And my freedom’s my lairdship nae monarch  dare touch.

from Up in the Morning Early

When I was a young mother, I was earnest.

So earnest that I read a book called How to Raise a Creative Child.  I’m sure there were many efficacious ideas, but the only one I remember implementing was the one about driving.  Instead of traveling the same route to a typical destination, say the library, you were supposed to mix it up.  Get outside the groove.   I earnestly suggested this to my forbearing husband.

Curt had a way of humoring my silly notions and having fun at the same time.

“Let’s turn on H instead of G” I’d prod.  [Can you believe it?  Our city planners named the streets after the alphabet!!  Their mothers hadn’t read the book.]

“Oh, is it time to drive creatively?” he’d ask.  And he’d drive as if we were in a go-cart at the fair, broad curves, on the wrong side, herky-jerky brakes, coming to a stop in the middle of the road.  [We live in a small town and this was always when there were no other cars on the road.]

The boys loved it.

“Daddy, drive creative!”  they’d scream, never quite knowing if or how Daddy was going to obey the command.

Those fun memories came to me on our recent trip to Seattle.  We went through four or five roundabouts.  If you look up roundabout in the dictionary it will say “a method of traffic control designed to produce creative children.”  Seriously, if my son had not just gotten his four wisdom teeth and a few shards of jawbone extracted yesterday, I’d make him write a paper on the engineering design of roundabouts.  Someone must believe they are beneficial; they are slowly replacing traditional intersectins.  Before Seattle, I’d only seen them in New England.

Curt will have his fill of driving creatively in Scotland and England.  He’s already nervous.  I offered to move the gear shift knobs while he pushes the clutch in, an offer which fails to bring him comfort.  We hope that we don’t run out of petrol, bang up the bonnet, blow a tyre running up a kerb, crash into a lorry, or rear-end the boot in front of us.  Translation here.

Any roundabouts in your neighborhood?

Her paintings fall into two groups:
street children of Glasgow and
land and seascape paintings of Catterline,
and East coast fishing village.
I would pair her pictures with Charles Dickens, don’t you think? 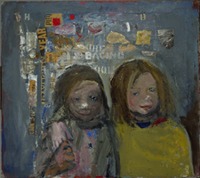 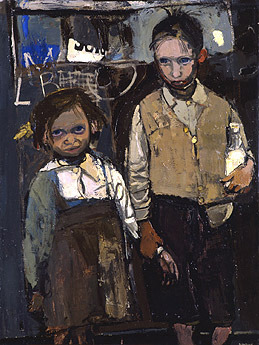 This is a compelling picture: the proprietary grip,
the arm cradling the milk, the clear eyes amidst the squalor… 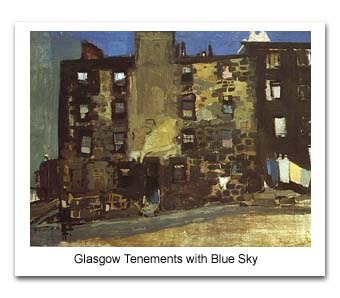 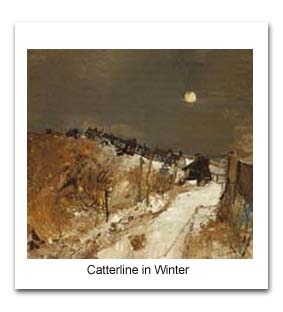 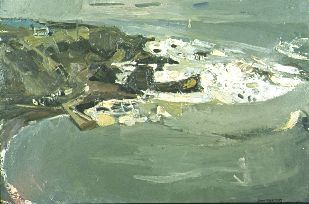 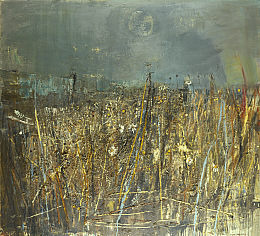 Seeded Grasses and Daisies, September The Seeded Grasses reminded me of this photo, taken by Donna.
Donna at Quiet Life blesses us with beautiful and artistic photos every day. 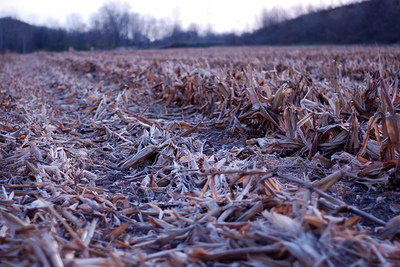 We watched Visions of Scotland last night, one of those films shot
from a helicopter with minimal narration.  My husband was a skeptic.
Green fields, castles, and lochs abounded, picturesque to the 13th degree.
Of course, Scotland was showing her best side.
But every country has its shot-nosed ragamuffins, doesn’t it now? 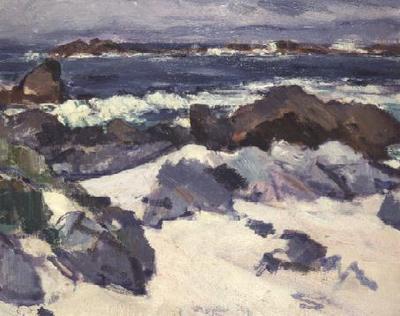 a painting in a gallery is suspected of being a Peploe.  I’d never heard of the chap (I’m working on my British idioms), so I looked him up.  Peploe (1871-1935) was in a group of artists called the Scottish Colourists. 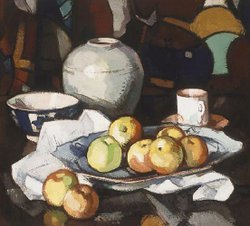 Peploe is noted for his still lifes. 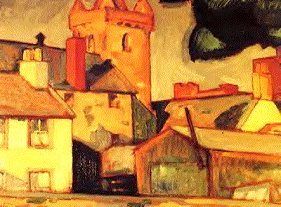 “In Kirkcudbright one either fishes or paints.”
Dorothy L. Sayers in The Five Red Herrings 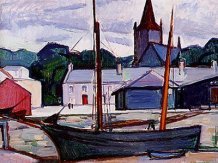 Here are two Kirkcudbright paintings by Peploe.
The lower one reminds me of Edward Hopper.

My first thought when I saw some of Peploe’s works was
“Here is a modern art which I like.” When I wrote about our upcoming trip to Scotland, I asked for books you would recommend.  Alfonso commented, recommending Dear Frankie

.  It is seldom that I find more than one movie I really, really like in one season year.  And after Sweet Land, I believe I’ve filled my quota.

Let’s get the problems out of the way:  there is some language, the worst kind (I’d rather hear a f-bomb before a casual muttering of the Lord’s name – and I loathe the f-bomb).  The ending wasn’t credible from my point of view and lacked consistency with the tenor of the entire movie.  In one sense it was too neat and tidy; however, it left one key relationship unresolved.

What this movie illustrates is a profound father hunger which I believe we are all born with.  Some are blessed to have that hunger assuaged, others know the gnawing bite which takes up residence.  I’ve said before that the most attractive traits in a potential husband are the ones which would make him a good dad.

The silences in this movie are full of drama and tension.  Much can be communicated without words.

The dialog is delightful – in heaven I’m sure we’ll speak in a lilting Scottish brogue, swallowing our tees and ending sentences with an upward tones.  If you have a hard time catching the words, try watching it with subtitles.

This movie gives a great view of the Edinburgh residents see – the city outside of the Royal Mile.

Thank you, Alfonso, very, very much.

Delight yourself in the Lord;And He will give you the desires of your heart.
~ from Psalm 37 On St. Patrick’s day just ten months ago I wrote

It is a dream of mine to see Iona some day,
to stand on these grounds
and to thank God for his faithful servants.

I don’t know how to write the next words….
My husband and I are going to Scotland next spring. We’ve been given a gift of a trip to the
destination of our choosing.
Reservations have been made.

Scotland sings to me.

I can only blame the books.
They – I couldn’t say which ones specifically –
breathed into my soul a love
for all things Scottish,
a yearning to see the rugged Highlands,
a kinship with a people. So I’m starting the journey of planning.
Experienced travelers tell me
this can be as fun as the trip itself.

Any suggestions out there?

Rise, Caledonia, let your voices ring
In this Highland Cathedral of our God and King.

Whom, joy and liberty, to all, will bring.

Come; let your heart, with love and courage, sing