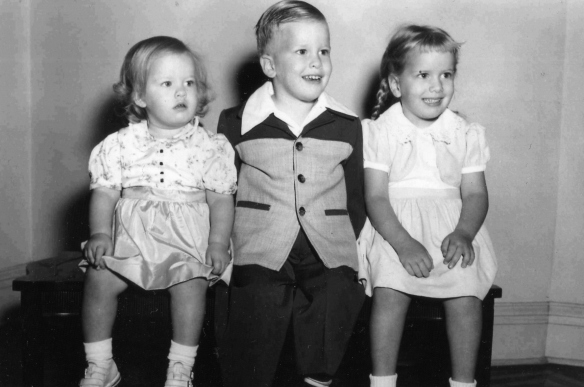 I was struggling to find a text that would fit Margaret. My wife read this to me and I’d like to read it to you. Now the Proverbs are difficult, sometimes, to understand. I’ll give you my take on this particular verse.

All the days of the afflicted are hard,
but the cheerful heart has a continual feast.
Proverbs 15:15

You’ve already heard that Harpers like food…and you can tell! But, I think that the contrast here, as it ought to be interpreted, is the contrast of the afflicted in their person, in their soul.

I’m going to apply it to Margaret. She was afflicted and endured many days of difficulty. Difficulty that I don’t know anything about, and most of us don’t. She endured a lot of affliction in her person, but not in her soul. She was a cheerful person. I don’t think I ever heard her complain. She was a joyful person.

I remember when she came out to visit us, she had just graduated [from college] and it was December. She came out to Johnstown and I had gone over to pick her up. She had headaches then. She came to our house, and her headaches were so bad she was continually throwing up. It was that tough.

We didn’t know what to do. So, we took her to our family doctor who was on vacation; he had a substitute who couldn’t get rid of her fast enough. He thought it was bad, and it was. She went to a neurosurgeon in Altoona. He didn’t have any ability or didn’t think he could do anything about it.

So we took her to Pittsburgh to Montefiore Hospital. She was still in pain and they were arguing, as neurosurgeons and neurologists do. Arguing about what kind of tack to go with her. They couldn’t decide because they didn’t know what was going on.

The thing that gave her relief was a spinal tap to take fluid off her spine. It gave her relief for a day or two then they would have to do it again. The rest is the long struggle that she went through. She was afflicted, but I never saw her without a smile on her face.  Even when she was in that kind of pain, I still remember that.

But, she is now with the Lord and none of us would want her back. Well, maybe John would. But I think we all realize she is far better off now.

One of the things we did as a family —the John Harper family is large, in more than one way— as we grew up, part of our time was [living] out in the country. Dorothy, Margaret, and I went to the old Bogan School. That school was a two-room school house with four grades. Did you go too, John? It was a tough go. It was five miles from our house (or so it seemed) and it was uphill both ways.  It was hard! We went to this little schoolhouse and I just think about my mother who for three-and-half-years raised seven contentious children [alone].

Then we went to Bair Lake [Bible Camp] in the summertime, most likely because it was free room and board for seven kids. My dad was the manager of the camp and that’s where we got to know a lot of friends. We were there every summer and enjoyed it. Love for camp came from those days. Even when I was in high school we would go from Chicago back to Bair Lake. When I was in college we would do the same thing: go on weekends. And build things and do things. It was something I really enjoyed and I think all our family did.

One thing I want to remind all of us here, was one of those situations that was not dealt with happily by my sister. One of the services she performed for us brothers: more than once her girlfriends became our girlfriends. She was just a bit miffed about it. I remember that. It didn’t take except for Dan. That worked well. Real well.

One of the things I especially appreciated about Margaret was her happy spirit and this verse reflected that.

She loved food. We all loved food. But she couldn’t really appreciate the other senses of life. Walking around. Getting up. I sit for a while and I get kind of sore. And I think Margaret must have gotten a lot of soreness, too. And I appreciate what she went through to the limit and extent that I can.

I want to tell you about a time that Margaret was in Grand Rapids and was in the hospital. She had just had a number of mini-seizures and she was flat on her back.  I came in to visit her. I’m talking to her. She’s still her joyful and smiling person. Then she told me this thing that stunned me. She told me about this guy, John Walker, who had just asked her to marry him.

Yeah, but I am going to tell him no. (I don’t think she actually told him no, but she was planning on telling him no.)

He deserves far better than me, she said. Of course they became good friends, not only at River Forest, but playing Scrabble. (She could beat me. Whupped me.)

I said, Well, why would you say no?

I can’t give him children. He deserves far better than me. Look at me! I can’t do anything.

Margaret, it’s very clear that John loves you. He doesn’t love your body, he loves you as a person. And if I were you, I would get on the phone and say yes.

The way it turned out is that in Scrabble ‘YES’ is more points than ‘NO’. So Margaret said, I’m going for the big word!

As far as our family is concerned, John is a prince. I could not do what John has done. Over twenty-one years. Truly remarkable. And we thank the Lord for you, John.