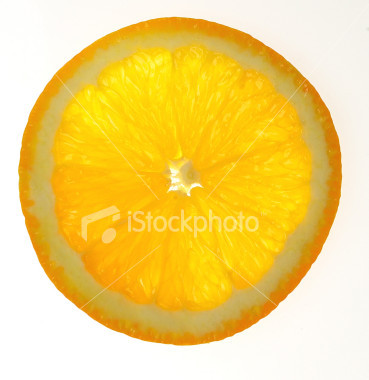 Combine in saucepan and bring to boil.
Reduce heat and simmer.
Add water as needed.

Mixture may be reused for several days.
Please don’t consume this: it’s all about aroma.

This recipe was posted on a blog last year and I failed to note the source.  I’d love to give credit to the one who posted this.   I surely enjoyed it.

[I don’t have one picture from the wedding on our camera.  Hey bros or friends, if you have one, could you email it to me so I could insert it here?] 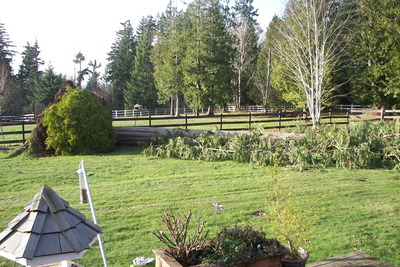 Details:  Jessie, my gifted florist daughter-in-law, and I traveled Thursday to Taryn’s house so Jessie could begin arranging flowers for the wedding.  The flowers were delivered safely just hours before the storm descended. We stayed in a motorhome that night as the tempest roared (the Advent winds begin to stir with sea-like sounds in our Scotch fir).  The wind groaned and shook the RV.  We woke early and surveyed the damage: a huge cedar down in the front yard and four trees down in the back pasture.  A different angle and the tree could have easily landed on the master bedroom and turned the weekend to tragedy. The horses were alive and hadn’t gotten out. There was no power; Taryn’s family had a gas stove that provided heat.

As Friday unfolded, the extent of the storm became manifest.  It soon became evident that we would need to start developing a Plan B.  The cell phones were constantly in use as we worked through endless details in succession, one after another. [I humbly recant my rant about loathing cell phones.] We found a Costco that had power where we could at least purchase food to feed the group assembling at the house.  This Costco had gas for sale and there was a line a mile long in both directions.  Welcome to Soviet Russia!   The off-ramp from the highway moved at a snail’s pace, at the rate it takes to fill a car tank with gas.  Back at Taryn’s house we grilled burgers, lit candles, and ended up sleeping on the dining room floor in borrowed blankets and sleeping bags.

The Saturday morning dawn was quiet and dark.  Sea-Tac had reopened and my siblings were arriving.  We trekked down to pick them up, in yuckky, non-showered bodies.  A 1907 hotel in downtown Seattle had rooms and power so we dropped people off and worked our way back to homebase.  Don’t even get me started on Seattle traffic.

A friend with bridal connections suggested a facility for the wedding that was available Sunday evening, but not available for a rehearsal Saturday night.  Cell phones roamed and the search for a rehearsal continued.  A church graciously allowed us to use their sanctuary and all the participants in the rehearsal were notified of the change.  We started making phone calls to the 200 guests to inform them of the new venue.

On Sunday afternoon Jessie did the most spectacular job making the new room perfect for the wedding.  She harvested greens from the downed cedar and firs and arranged them with magnificent skill.  The wood paneled walls were decorated with swags; the fireplace and mantel provided a focal point; bouquets of red and white roses, calla lilies, white daisies and deep red roses in tall, slender vases were on every table.  The soft light of  votive candles, dozens and dozens of them, made the room twinkle and glow.

The sweet, clear tones from a harp and violin played Christmas carols as the prelude.  There was a hush as the mothers were ushered in to the tender notes of Silent Night.  Taryn was radiant on her father’s arm as they proceeded down the aisle to the music of O Holy Night.  Both fathers spoke words of blessing to the couple. Our pastor, Bonnie’s husband, gave one of the best wedding sermons I’ve ever heard.  My brother Dan sang, lovely as usual. Vows were made, rings exchanged, communion received, pronouncement made, the kiss, and then the smiles…… Carson and Taryn were incapable of straight faces.  Smiles and laughter and good cheer and celebration and  Joy to the world.

•  watching all the groomsmen sing the first verse of Be Thou My Vision from memory.  There is something about men singing which melts me.  These young men were handsome, manly, and quite comfortable singing a hymn.

•  dancing with my husband, eyes full of wordless wonder

•  standing with Taryn’s mom, arms around each other, watching our kids dance, soaking in the moment

•  the body of Christ ministering in countless ways.  People pitched in to help and friends far away prayed. It’s so good to be part of community where burdens and joys are gladly shared.

•  memorized scripture which came to my frazzled mind and comforted me:

The Lord gives and the Lord takes away, blessed be the name of the Lord.
Trust in the Lord with all your heart and lean not unto thine own understanding.
In all thy ways acknowledge Him and He shall direct thy paths.

He gives us beauty for ashes,
the oil of joy for mourning,
a garment of praise for the spirit of heaviness,
that we might be trees of righteousness,
the planting of the Lord,
that He might be glorified.

•  sharing the experience with all but one of my siblings.  Deep belly laughs punctuated our time together.  Here is a random family picture of us at the hotel together. I’m in the middle, my brother Dan is by the window trying to get wireless connection to find a motel closer to the wedding. 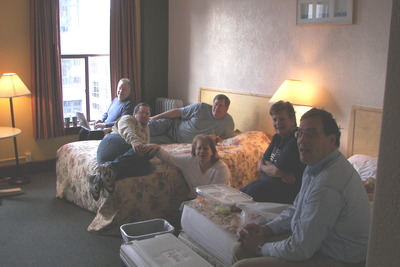 Officially, we are behind in school.  Wedding preparations and other life events have crowded our schedule.  But! In the glorious timing of our behindness we get to read Athanasius’s On the Incarnation during Advent.  How awesome (a word I very seldom use) is that?

Athanasius is a great Trinitarian hero.  I get tingly and throat-lumpy whenever I sing or hear this verse in O Come All Ye Faithful:

God of God, Light of Light;Lo, he abhors not the Virgin’s womb:Very God, begotten, not created;

I usually whisper a quick prayer, “Thank you, Lord, for Athanasius.”  If not for him, we would not sing that verse.

Short version of a great story:  Athanasius Contra Mundum (Athanasius against the world) is a well known phrase from early church history.  A controversy boiled over in the fourth century.  A man named Arian had persuaded most of the bishops that Christ was just a man.  Athanasius strove for the doctrine of the deity of Christ. Someone said to the Great A. “Athanasius, the whole world is against you.”  His reply was, “Then Athanasius is against the world.”

A bonus is the Introduction by C.S. Lewis.  Can I tempt you with some Lewis quotes?

There is a strange idea abroad that in every subject the ancient books should be read only by the professionals, and that the amateur should content himself with the modern books.
~     ~     ~

It is a good rule, after reading a new book, never to allow yourself another new one till you have read an old one in between.  If that is too much for you, you should at least read one old one to every three new ones.

The only palliative [for chronological blindness] is to keep the clean sea breeze of the centuries blowing through our minds, and this can be done only by reading old books.

So what do you think of those quotes?  Do you agree or disagree?  Are you like me, who agrees in theory, but has not put it into practice?