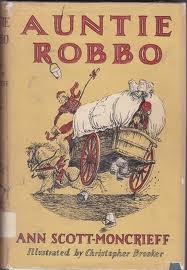 Here is a diamond of a book!

I want to wave down readers and persuade them to read this gem.

is a rollicking tale of an orphaned boy, Hector Murdoch (11), and his great-grand-aunt and guardian, Robina Sketheway (81). They got on as well together as any two people possibly could.

Their idyllic whimsical life at Nethermuir, twelve miles from Edinburgh, is threatened when Hector’s step-mother, Merlissa Benck, a woman he has never before met, visits with the aim of adopting Hector.  She sniffs around and is appalled at the the lifestyle of this unusual pair.

“But what about … Hector, wait for me … What about other subjects?”

“Oh, Auntie Robbo knows all about them. Sometimes we do sums. We keep account books, and history—lots of history; then afterwards we ride over the battlefields and go and look at the castles where the murders were done.”

“I dare say,” said Merlissa Benck shortly. “But I should have thought British history would have been more suitable for a boy of your age, indispensable in my opinion. England’s story is a very great and noble one.”

“Yes,” said Hector. “But then we couldn’t ride to the battlefields, could we? I mean they were mostly fighting in places that didn’t belong to them, weren’t they?”

Hector is smart enough to apprehend the intent of Merlissa Benck: how easily she could “prove” dear unconventional Auntie Robbo was mad, stake her claim and clap the lad into dreaded public school.  So Hector and Auntie Robbo slip away at night.  On the train from Edinburgh they pick up three waifs: a brother, sister and cousin.  Fugitives, they live in a tinker’s cart, traveling through Scotland.

And when the fresh curling trout had been eaten, with a mound of scones and butter, they lay late round the fire, swilling cocoa, arguing again about stags and cows, telling stories, and looking back on yet another well-spent perfect day.

My journey to Auntie Robbo was through Russell Kirk’s autobiography.  While studying at St. Andrews, Kirk became friends with the widower George Scott-Moncrieff.  One phrase intrigued me: his wife Ann, who wrote inimitable children’s books…

A search on her name introduced me to Auntie Robbo, which is printed in full at Gutenberg.  I dare you to read the first chapter.  I had to decide whether to buy the book (which involved waiting at least ten days), print the book (115 pages) or read it online.  I opened my laptop, used “Control +” to increase the font size and read all 22 chapters in one sitting.

Here is a buffet of Scott-Moncrieff’s delectable sentences:

He slipped out of questions like a mackerel fry through a herring net.There was a spluttering of laughter like geese being chased across a field.And the sea, deep and green as oil silk, swayed and sucked about the feet of these cliffs, growling with hunger, like an old lion who paws a gristly piece of meat and wonders if it’s worth a broken tooth and a belly-ache.She thought she had slipped into her dotage….Years ago, round about seventy, she had accepted such things as inevitable, much as children accept that they will one day be grown up; but by this time she was eighty-one, she had forgotten about dotage and death again, and it was very unpleasant to be confronted by one of them suddenly.

This is a book I plan to read at least once a year until I slip into my dotage.  I laughed aloud; I disrupted my husband’s concentration, intruding with quotes. I have plans for read alouds with the grands.  I’m baffled why Auntie Robbo has remained unknown to me before now.

Picture a madcap Maggie Smith with laughter and twinkling eyes, and you’ve got Auntie Robbo.

If I knew an ounce about writing a screenplay, I’d do it myself.

10 thoughts on “My New Favorite Book”