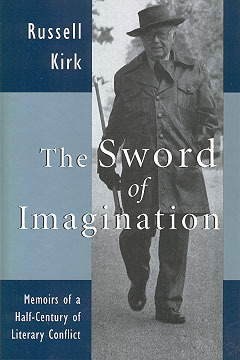 When I picked up Sword Of Imagination: Memoirs Half Century Literary Conflict

I respected Russell Kirk.  By the time I finished the book I was quite fond of this charming articulate author.

Kirk’s name doesn’t have the recognition that William F. Buckley Jr.’s does but they are closely connected.  In 1953 Kirk wrote The Conservative Mind: From Burke to Eliot

Kirk warns the reader in the preface:

Enthusiasts for modernity, the global village, the end of history, the gross national product, emancipation from moral inhibitions, abstract rights without concomitant duties, and what Samuel Johnson called “the lust for innovation”–why, such folk may be little pleased by my fulminations and vaticinations.

Dr. Kirk had an antiquated vocation: man of letters, an intellectual devoted to literary activities.  (An aside: To be a woman of letters is my ideal occupation: to read and write all day, all week, all year!)  Writing his memoirs in the third person,

Kirk believed that his political function it was to work upon the body politic by endeavoring to rouse the political and moral imagination among the shapers of public opinion — that large category including political leaders; opinion makers of serious journals, the mass media, the academy, and the church; and that unknowable crowd of individuals who, as Dicey points out, influence their neighbors by the strength of their convictions. By talent, he was a writer, a speaker, an editor. In the long run, conceivably he might demolish some molehills, if not move mountains. The only weapon with which he was skilled was the sword of imagination.

In this highly detailed autobiography Kirk outlines how he moved from a boy living next to the railroad yards to a nationally regarded intellectual. His peregrinations took him to Michigan State College, the Salt Lake desert, Duke University, St. Andrews, throughout the United States and Europe.

The book reads like a popular history of the second half of the twentieth century.  Kirk writes engagingly of his encounters with many leaders: Richard Weaver, Donald Davidson, Flannery O’Connor, T.S. Eliot, Barry Goldwater, Lyndon B. Johnson, Hoover, McCarthy, Nixon, Reagan, and Pope John Paul II.  Never bland in his opinions, he writes generously of both of his convivial and and his adversarial relationships.

Kirk’s writing is both erudite and highly personal.  The winning of his young wife, Annette, is the kind of romance I enjoy reading.  Together they build a family (four daughters) and a community of scholarship and fellowship.  Kirk writes of his wife, “Openhanded, glowing with life, and discerningly compassionate, Annette Courtemanche Kirk turned the shadowy old house, without altering its character, into a center of charitable and intellectual undertakings, so that it was crowded with people of all sorts and conditions.” A young visitor paid the Kirks a supreme compliment calling their place the Last Homely House, a reference to Elrond’s Rivendell in The Lord of the Rings.

One thing I found uncomfortable was Kirk’s love of ghost stories, haunted houses and his dabbling in things uncanny.

I know a book was worth reading when the reading of Book A makes me want to read Book B,C,D,E and F.  I finished Sword Of Imagination

with a renewed desire to read several books already on my shelves: Edmund Burke: A Genius Reconsidered

, The Habit of Being: Letters of Flannery O’Connor

(I need to become acquainted with Eliot), and a book on economics that Dr. Kirk wrote Economics: Work and Prosperity

7 thoughts on “The Sword of Imagination”