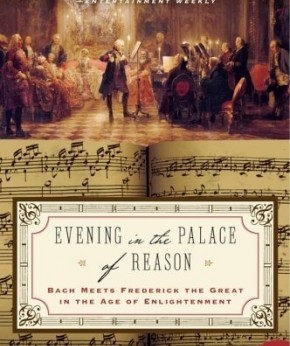 I wrote this book because I have always loved Bach’smusic and always wanted to know the man who madeit. But I was also drawn to investigate the oppositionof reason and faith. ~ James R. Gaines

“I have just finished a book that I am going to count among my favorites of all time. It is that good. You have GOT to read it.”  After Gene Veith’s emphatic review, I had to read James Gaines’ Evening in the Palace of Reason

Evening in the Palace follows two trends: first to tether an entire book around a single piece of art, as in Chevalier’s Girl with a Pearl Earring

or Vreeland’s Luncheon of the Boating Party

or Julie and Julia

.  Gaines writes an overview of the lives of Johann Sebastian Bach and Frederick the Great but focuses on a confrontation between the two men and the music that resulted from it.

What Gaines does exceedingly well is to illustrate the difference in Medieval / Reformation assumptions and those of the Enlightenment.

[A]mong the Enlightenment’s least explicit legacies to us is a common understanding that there is a gulf, a space that defines a substantial difference, between spiritual and secular life. For Bach there was no such place, no realm of neutrality or middle ground that was not a commitment to one side or the other in the great battle between God and Satan.
What most divided him [Bach] from them [the next generation] was their motive for making music at all, of whatever sort.  The new “enlightened” composer wrote for one reason and one only: to please the audience.

[Carol sets up her soapbox and mounts it. The shrill voice emerges.]

There is one and only one way to read this book: that is while listening to  The Art of Fugue Musical Offering (or here

I highly recommend this book.  I highly recommend Bach.  Even if you have no musical background, no previous exposure to his music, Bach’s music will seep into your soul and water the parched places. If you love someone who already loves Bach, get him or her the book and the CD.

We can talk about his brilliantly melodic part writing,the richness of his counterpoint, the wayhis music follows text the way roses follow a trellis,in perfect fidelity and submission but at not the slightest sacrifice of beauty.Finally, though, one comes up against the fact that the greatest of great music is in its abilityto express the unutterable.
Advertisement

2 thoughts on “For the Bach Lover on your list”