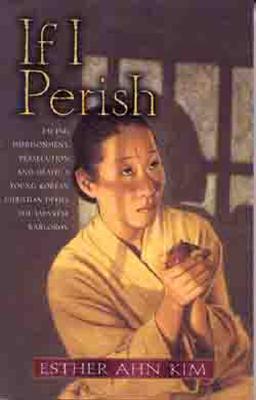 I don’t understand Korea.  Why it is divided, why we fought a war, what distinguishes it from other Asian countries.  Helpful books are waiting on my shelf; If I Perish

, by Esther Ahn Kim (Ahn E. Sook) was the first one I picked up. The setting of the book is Japanese-occupied Korea during World War II.

Kim tells the compelling story of her six years of imprisonment for refusing to bow to a shrine. Like holocaust memoirs, it is incredible to fathom what a body and spirit can endure.  Her courage is huge, but so is her honesty: she was resolved to die a martyr’s death, but she was horrified at the thought of being cold.  She was, in short, perishable.

The readiness is all. (Hamlet)  After her first escape from prison, Kim found refuge in an abandoned country home.  Expecting future imprisonment, she began a systematic preparation for persecution.  Did you read that last sentence?  She prepared for persecution.

She memorized more than one hundred chapters of the Bible and many hymns.  She fasted to train her body to live without food and drink: first three days, then seven, then ten.  She barely survived the ten day fast.  The role of food in her life fascinated me.

Thoughts of food never left my mind. 146The thought that I might die of hunger and not be able to join the martyrsmade me gloomy.  Didn’t I even havea little of a nature, or did I only have a beggar’s stomach? 147
The only way I could show her my love, I decided,was to give her my meals. However, determined as Iwas, all the food went into my mouth when it was served.What a despicable, ugly person I was.I was upset and sickened at myself.I rebuked and insulted myself more than I had ever done before, but when the mealtimecame, I was again finding excuses. The battlecontinued for several days, but each day I lost. Then when I was praying, a ray of light touched my spirit.“I will offer my meal to Jesus!”I carried my food quickly to Wha Choon.“This is Jesus’ meal. I have offered it to Him.And He wants you to have it, so thank Him and eat it.”192 (abridged)
Ahn’s mother is a great study.  She kept the view of eternity on the dashboard of her life.
“Whatever might happen to you,” she cautioned me,“you should never forget the moment when you shallreach the gate of heaven. Be faithful,” she said. 176
Mother couldn’t sing a tune, made some funny linguistic mistakes, but she could work. This next quote is going into my file on working to the glory of God:
Because her heart was pure, she always worked diligentlyto make her surroundings clean, too, by washing, sweeping and polishing the house. She was truly a living testimony ofGod’s grace, strong spiritually, and very dependable. 128
Who wouldn’t desire to be described this way?
Wherever Mother was, it was like a
chapel of heaven around her. 129

Esther Ahn Kim’s faith was vibrant, vocal, bold.  Amazingly, she lived when many others died.  My favorite quote from this book illustrates the active nature of that faith.

I looked out the window and saw a bird trembling on a bare boughthat had long ago withered. I was just like that bird. Suddenly I shookmy head to the right and left vigorously. That courageous bird wasplaying in a swirling snowstorm, ignoring her enemies. I had to be such a bird. If she only perched on that withered bough with herhead stuck beneath her wing and feared the wind, snow, heaven,earth, and everything else that might challenge her, she would only freeze and die when night came. 135
Advertisement