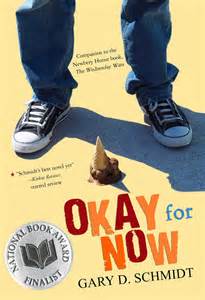 I enjoy persuading adult readers to read well-written young adult books. Gary Schmidt’s  book is one I recommend, perhaps even more for older readers than for a middle schooler. It made me snort with laughter and it turned me into a sobbing, sniffing mess.

Doug Swieteck has a lying, blustering, bullying, abusive father. His mom tries to compensate, neutralizing her husband’s venom to the best of her ability within the strictures of 1960’s mores. Doug’s older brothers are plain mean.

I tried to talk to my father about it. But it was a wrong day. Most days are wrong days.

So convincing is Doug’s voice that I could hear it. “Terrific.” “I hate stupid Marysville.” “You know how that felt?” and Doug’s trademark phrase, “I’m not lying.”

Perhaps we’ve all grown up with someone like Doug, a mixture of bravado and vulnerable. Someone outside the family takes an interest and tries to pull that kid up above his/her circumstances. Doug had his share of tormentors, but also four mentors who invested in him.

A few things seduced me. One brother is only identified as “my jerk brother.” He is changed by a horrific situation — converted (not religious) — and Doug begins calling him by his name. It is a subtle but significant clue. The smile motif captured me. Pay attention to the smiles.

I listened to the audio version (5 stars for Lincoln Hoppe’s narration–except he mispronounced  Cowper— it’s Cooper), but was compelled to read the words.

And see the pictures. Doug Swieteck’s doorway to a better life comes through John James Audubon’s bird pictures. (The hefty Birds of America was the first gift I gave my husband after we married.) Each chapter is named after an Audubon bird; the audio experienced is diminished without seeing the prints.

There is a broad ranged of interests represented in this book: Audubon, Apollo 11, the Vietnam War, Jane Eyre, Periodic Table, baseball, and Aaron Copland. There is drama, devastation, and unexpected grace. I loved the book. Would a young teen love it?