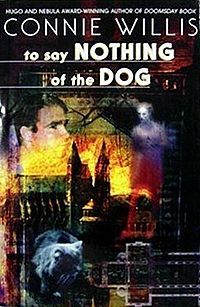 Whenever I’ve mentioned Jerome K. Jerome’s 1889 classic, Three men in a boat (to say nothing of the dog)

, a small chorus of readers entreated urged me to read Connie Willis’ science fiction book To Say Nothing of the Dog

This chorus included readers I trust, those with whom I share a kinship in books. But, really. Look at the cover. I ask you: would you feel compelled to read this book? And when was the last time I read science fiction? I just don’t have the stamina or brain power to keep all the galaxies and unfamiliar creatures straight.

But I have a personal reading philosophy: deep and wide. I choose to read a few books that require patience and effort. Similarly, I like to widen the scope of my reading so I’m not stuck in one genre, one century, or one culture.

I read the book.

And, dear chorus of friends, dear ones…I LOVED IT.

How can an author born in 1945 write so timelessly? With such humor and grace?

And how does one describe this book? The story is set in Oxford in 2057. Historians use a time travel machine to research historical periods. They are not allowed to change history. Ned, a specialist in 20th century history, is transported to 19th century Victorian England. So the book is much more Victorian, more literary than sci-fi. As he mingles and converses with Victorian-era people, Ned runs his thoughts through a mental screen to see if they would make sense. Before he can reference a poem, a piece of music, or an historical fact, he must make sure it is truly historical to 1888.

My delight gurgled when Ned is boating down the Thames with Terence, an Oxford student he met, and he sees three men in a boat, and breaks the cardinal rule of time-travel behavior.

“Dog?” Terence said contemptuously. “You call that a dog?” He looked fondly at Cyril, who was snoring in the bottom of the boat. “Cyril could swallow him in one bite.”

“You don’t understand,” I said. “It’s the Three Men in a Boat. The tin of pineapple and George’s banjo and the maze.”

“Yes, you know, Harris went in the Hampton Court Maze with this map and all these people followed him and the map didn’t work and they got hopelessly lost and they had to call out for the keeper to come and get them out.”

I leaned out for a better look. There they were, Jerome K. Jerome and the two friends he had immortalized (to say nothing of the dog) on that historic trip up the Thames. They had no idea they were going to be famous a hundred and fifty years from now, that their adventures with the cheese and the steam launch and the swans would be read by countless generations.

Each chapter has a dozen or so sub-headers listed at the beginning, the kind of delightful detail one seldom sees in modern books. Here’s an example from Chapter Seven:

If you are an Anglophile, if you like Jeeves, Holmes, Jerome, Chesterton or Agatha, you would enjoy this book. If you like books with the interjections Pshaw! Balderdash! and Rubbish!, you’ll like this one. It isn’t necessary to have first read JKJ’s Three Men to enjoy To Say Nothing of the Dog, but I recommend you read it sometime. Here is a generous sampling of quotes from Three Men.

9 thoughts on “To Say Nothing of the Dog”