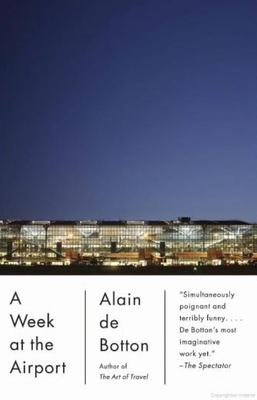 The airport and the DMV are the two best places in the world for the sport of people-watching. For diversity, there is no better place in the world than London’s Heathrow airport.

Alain de Botton was hired by British Airways to spend a week at Heathrow’s Terminal 5 and write a book about his experience. It is an engaging read, easy enough to complete in one sitting, but worthy of a slower pace. It examines why we fly, the intersection between art and commerce, the choreography of an ediface that took 20 years to build. You might think of it as “light plus” reading. There are photos on every page (that’s the light). With the book classified as Travel/Philosophy, there is more commentary on life than on luggage (that’s the plus!).

The book reminded me of reading The Geography of Nowhere. Of course it did! There’s a full-circle connection: LaurieLH remarked that Geography of Nowhere was similar to a book she was reading by Alain de Botton, <a href="http://www.xanga.com/private/“>The Architecture of Happiness. It was in looking for The Architecture of Happiness at my public library, that I found A Week at the Airport! 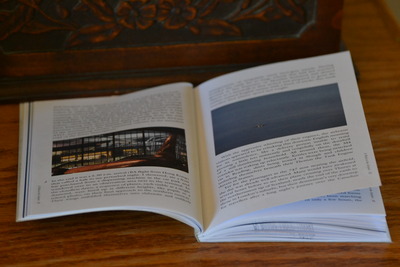 From the management required to keep airline employees congenial
to the elegance of the steel columns supporting the 18,000 ton roof
to the devastation of parting lovers
to the way a domestic squabble so quickly erodes the joy of a vacation
to the expectations of travelers arriving at the reception zone,
I found it delightful. Not earth-shattering, nor life-changing, but a mixture of trivia and truth.

Despite its seeming mundanity, the ritual of flying remains indelibly linked, even in secular times, to the momentous themes of existence—and their refractions in the stores of the world’s religions. We have heard about too many ascensions, too many voices from heaven, too many airborne angels and saints to ever be able to regard the business of flight from an entirely pedestrian perspective, as we might, say, the act of traveling by train. 62

Considered collectively, as a cohesive industry, civil aviation had never in its history shown a profit. Just as significantly, neither had book publishing. 79

The notion of the journey as a harbinger of resolution was once an essential element of the religious pilgrimage, defined as an excursion through the outer world undertaken in an effort to promote and reinforce an inner revolution. Christian theorists were not in the least troubled by the dangers, discomforts or expense posed by pilgrimages, for they regarded these and other apparent disadvantages as mechanisms whereby the underlying spiritual intent of the trip could be rendered more vivid. 104

I appreciated de Botton’s thoughts about setting up a desk smack dab in the middle of the terminal:

Objectively good places to work rarely end up being so; in their faultlessness, quiet and well-equipped studies have a habit of rendering the fear of failure overwhelming. Original thoughts are like shy animals. We sometimes have to look the other way—towards a busy street or terminal—before they run out of their burrows. 42

1 thought on “A Week at the Airport”