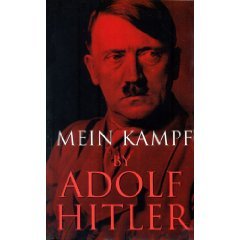 Why did you want to read Mein Kampf (My Struggle)?

•  Initially I wanted to see how transparent Hitler was.  How clear were his statements?  Abraham Foxman writes in the Introduction:  “Mein Kampf’s existence denies the free world the excuse of ignorance.”
•  Hitler’s opening words.  “To an ever-increasing extent world history became for me an inexhaustible source of understanding for the historical events of the present; in other words, for politics.  I do not want to ‘learn’ it, I want it to instruct me.  (p.16)  Reading this book is one of the steps in answering the question ‘How could the Holocaust happen?’
•  History fascinates me.  It is so interconnected: one really cannot understand WW2 without a knowledge of WW1; the Franco-Prussian War of 1870 is an important context of WW1, Napolean etc. etc.  A mentor long ago convinced me of the value of primary source documents.

What was your overall impression?

I agree with Mussolini who called it ‘Hitler’s boring book‘.  Hitler considered himself a gifted orator.  He was no writer.  It was hard to follow his circular logic.  Much of his rhetoric was vitriol and vituperation.  Frankly, it was agony to read.  My husband could not understand my compulsion to make it through to the end.

Surprisingly, yes.
•  Describing the poverty of his youth: “Hunger was then my faithful bodyguard.” (p.21).
•  “The receptivity of the great masses is very limited, their intelligence is small, but their power of forgetting is enormous. ”  (p.180)
•  This phrase tickled me: “a sneak and a spineless lickspittle”
•   He advocated strong sports and physical fitness programs for boys.
•   Hitler’s commentary on (generic) committee members: “…who were in a kind of continuous pregnancy with excellent plans, ideas, projects, methods.”  He said that the best means of making them harmless was to assign them to some real work.

So.  How did he really feel about the Jews?

Whom, besides the Jews, did Hitler hate?

Were there any foreshadowings of Hitler’s invasions?

•  Hitler describes correct foreign policy as “a strengthening of our continental power by gaining new soil in Europe.” (p.612)
•  These circles never even began to realize that Germanization can only be applied to soil and never to people.  (p.388)

Mein Kampf is a witness against Hitler and his followers.  He clearly articulated the philosophy of Nazism.  While the horror of ‘The Final Solution’ wasn’t revealed, the open hatred of Jews is never hidden.
Advertisement