I always knew that the war ended in 1918 (on the eleventh hour of the eleventh day of the eleventh month), but not until this year did I understand that Armistice meant that the warring parties just agreed to cease fire.  All fighting stops.  But conspicuously missing are the hands raised in surrender.  It is a peace without victory.

Think of a well-matched neighborhood snowball fight.  Each side has fortifications, supplies of snowballs; both sides are getting pummeled but they are both holding their ground.  Then it starts drizzling.  And it gets dark.  Fingers are numb.  No one wants to surrender but everyone wants to stop.  “What’s the point, anyway?”  is the question going through each child’s head.  They agree to stop fighting and go home.  They negotiate an armistice.

The tide had turned in what has been called a war of exhaustion, and Germany was about to be beaten.  Since the Allies had not yet moved into German territory, the Germans sued for peace before they were forced to surrender.  Both sides fought, shooting cannons, using up their ammunition, until the minute the Armistice went into effect.  Isn’t that crazy?  Hundreds died utterly senseless deaths.  Of course, one could say that about the 9 million that died in the Great War.

“Nothing so electrical in effect as the sudden stop that came at 11 a.m. has ever occurred to me.  It was 10:60 precisely and-the roar stopped like a motor car hitting a wall.  The resulting quiet was uncanny in comparison.  From somewhere far below ground, Germans began to appear.  They clambered to parapets and began to shout wildly.  They threw their rifles, hats, bandoliers, bayonets, and trench knives toward us.  They began to sing.  Came one bewhiskered Hun with a concertina and he began goose stepping along the parapet followed in close file by fifty others-all goose stepping…We kept the boys under restraint as long as we could.  Finally the strain was too great.  A big Yank camed Carter ran out into No Man’s Land and planted the Stars and Stripes on a signal pole in the lip of a shell hole.  Keasby, a bugler, got out in front and began playing “The Star-Spangled Banner” on a German trumpet he’d found in Thiaucourt.  And they sang–Gee, how they sang!” 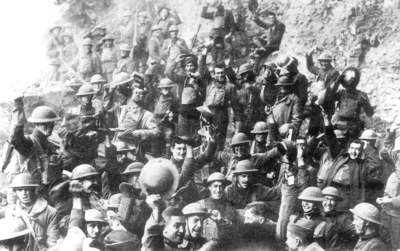 Beverly Cleary gives the view from Oregon on this morning, ninety years ago, in A Girl from Yamhill

“The morning is chilly.  Mother and I wear sweaters as I follow her around the big old house.  Suddenly bells begin to ring, the bells of Yamhill’s three churches, and the fire bell.  Mother seizes my hand and begins to run, out of the house, down the steps, across the muddy barnyard toward the barn where my father is working.  My short legs, cannot keep up.  I trip, stumble, and fall, tearing holes in the knees of my long brown cotton stocking, skinning my knees.

“You must never, never forget this day as long as you live,” Mother tells me as Father comes running out of the barn to meet us.

Year later, I asked Mother what was so important about that day when all the bells in Yamhill rang, the day I was never to forget.  She looked at me in astonishment and said, “Why, that was the end of the First World War.” I was two years old at the time.” 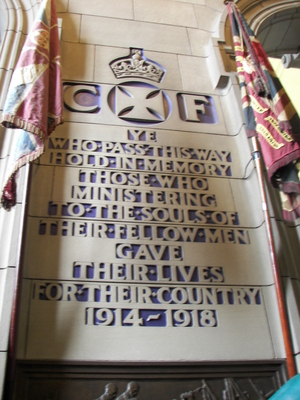 (Other posts I’ve written about WWI)

We began studying The Great War this summer, knowing that we would study the 20th century this year in school.  I never expected it to grab me like it did.  I’ve read a dozen or more books, seen a dozen films, discovered poets and artists, and talked my family to death.  In my mind, I’ve made this day, Armistice Day, the official cut-off of our study of WWI.  The Great War is over.  We have 80 more years of 20th century to cover.  WWII – oh. joy.