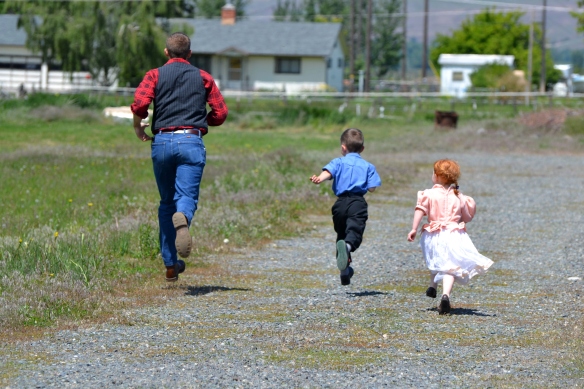 After writing about the sweet ceremony of greeting guests on Downton Abbey, I read this opening paragraph of Elizabeth Goudge’s The Bird in the Tree

Visitors to Dameroeshay, had they but known it, could have told just how much the children liked them by the particular spot at which they were met upon arrival.

If the visitor was definitely disliked, the children paid no attention to him until Ellen had forcibly thrust them into their best clothes and pushed them through the drawing-room door about the hour of five; when they extended limp paws in salutation, replied in polite monosyllables to inquiries as to their well-being, and then stood in a depressed row staring at the carpet, beautiful to behold but no more alive than three Della Robbia cherubs modelled out of plaster.

If, on the other hand, they tolerated the visitor, they would go so far as to meet him at the front door and ask if he had brought them anything.

If they liked him they would go to the gate at the end of the wood and wave encouragingly as he came towards them.

But if they loved him, if he was one of the inner circle, they would go right through the village, taking the dogs with them, and along the coast road to the corner by the cornfield, and when they saw the beloved approaching they would yell like all the fiends of hell let loose for the afternoon.

5 thoughts on “Meet and Greet Redux”