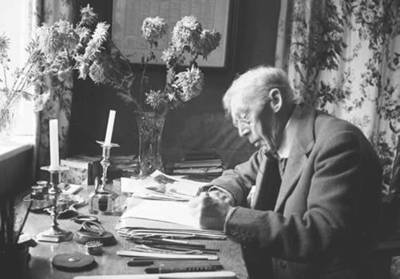 I’m reading and thoroughly enjoying, in dribs and drabs, Alphabet Juice: The Energies, Gists, and Spirits of Letters, Words, and Combinations Thereof; Their Roots, Bones, Innards, Piths, Pips, and Secret … With Examples of Their Usage Foul and Savory

. This section made me snort in laughter.

In his book On the Art of Writing

(1916), Sir Arthur Quiller-Couch, an eminent critic, anthologist, and adventure novelist, handed down a guideline for writers that people are still handing down. Usually people attribute it to Mark Twain, William Faulkner, Ernest Hemingway, F. Scott Fitzgerald, George Orwell, Noël Coward, W.H. Auden, Oscar Wilde, or someone else whose fame has lasted longer than Sir Arthur’s. Here is that guideline in its original form: “Whenever you feel an impulse to perpetrate a piece of exceptionally fine writing, obey it—whole-heartedly—and delete it before sending your manuscript to press: Murder your darlings.”

[…] What generations have taken from his admonitions, though, is that we writers should root out our own self-indulgent bits, the vivid turns of phrase that call attention to themselves instead of advancing the narrative for…you. The reader. […]

Yes, well. Sir Arthur’s pen name was Q. Some frills trimmed there. But don’t you suspect that after rejecting Kill your pets as too mean and Eliminate your sweeties as ambiguous, and then hitting, bingo, upon Murder your darlings—don’t you suspect that he thought to himself, Q, you are cooking?