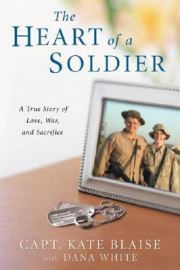 Heading out the door, remembering that my iPod needed to be re-charged, I swung by the library to pick up audiobook. As I scanned the shelves, someone bumped into me and apologized. “Oh, it’s you!” my dear friend Jan said. We were both in the same lane: looking for a good listen on a long, solo driving trip. In her hand was The Heart of a Soldier

, which she pressed into mine. “I just finished this: it’s quite good, you’ll appreciate it,” she assured me.

That’s how I came to listen to Kate Blaise’s memoir of a military marriage. The first half could be the story of any bright-eyed spunky grand-daughter of a Lutheran minister raised in a small town. I had read David McCullough’s Truman

last summer, so I connected with the flavor of Missouri.

My interest was peaked after Kate and Mike—high-school sweethearts—combine marriage and the military. I am neither a fan of women in combat positions nor of married couples living in separate quarters; yet I found Kate’s story compelling. She is honest about the stress of dual military careers. Because she held a higher rank than her husband, he saluted her in public. They were stationed in Korea when the 9-11 attack was made; later they were deployed in Iraq. I had just started the last disc when I arrived home. The next morning I sat down and wept—unable to combine listening with cooking or housework—as I came to the heart-breaking conclusion. Like all good stories, this one stuck with me long after I had finished it.

When Mike and I did manage to squeeze in a weekend together, we fought over even the smallest things: where to eat, what movie to see. We had fallen out of the habit of being together. Our visits, thought short, were extremely stressful. There was the pressure to get along because we didn’t know when we would see each other again; the pressure of squeezing a month’s worth of good times into a weekend when what we needed to do was resolve countless problems and issues. There was simply too much catching up to do and too little time to do it. We were fighting and clawing to feel needed in each other’s lives. 125

. Reading it was a vivid reminder to me of the risks our soldiers take and the sacrifices they make.