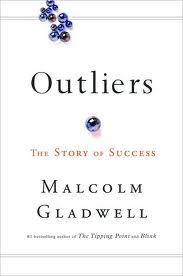 Superstar lawyers and math whizzes and software engineers appear at first blush to lie outside ordinary experience. But they don’t. They are products of history and community, of opportunity and legacy. Their success is not exceptional or mysterious. It is grounded in a web of advantages and inheritances, some deserved, some not, some earned, some just plain lucky—but all critical to making them who they are.

, strikes a blow against individualism. When he looks carefully at the super successful—outliers—he examines the generation, class, ethnicity, and culture of the outlier. Granted, an outlier like Bill Gates has genius.  But that alone cannot explain Gates’ success. Gladwell tells us why. This engaging book is a string of stories illustrating both the opportunities and the legacies given to many outliers, some whose names are household words, others more obscure. Gladwell discusses the 10,000 hour rule: that to excel at anything you must spend at least 10,000 hours working at it. In the story of Korean pilots, Gladwell discusses frankly how our ethnicity affects our success and/or failure.

While I’ve been digesting this book, I thought of an outlier in the blogging world: Ree Drummond of The Pioneer Woman. Many of you knew her as a homeschool mom on the Well-Trained Mind forum. She started a blog in 2006 that quickly exploded into a Big Deal. If you look at Ree’s gifts, you will find a writer whose appeal crosses cultural lines, a little naughty for some and wickedly funny to the rest. She parlayed her story of city girl transplanted to a cattle ranch into an entertaining story compete with cliff hangers. But Gladwell would urge us to look at where Ree is from, what opportunities she was given. My theory is that she is a marketing genius. In one sense she bought her audience, offering regular giveaways for high-ticket items. She had the capital to give away Nikon cameras and $500 Amazon gift cards, converting the number of clicks into advertising revenue. That alone would not have been enough to keep her audience, but it attracted them in the first place. The daughter of a surgeon, she was raised with the expectation of hard work and excellence. This does not  diminish Ree’s writing, Ree’s photography, Ree’s cooking, Ree’s everything: she just didn’t do it alone.

Happily, my favorite part of this book is the introduction. Happily? Yes! Because you can go Amazon

click on Look Inside! and read it yourself. It tells the story of Roseto, PA, a community whose medical history is so much better than the norm that researches spent years working to crack open its secret. The answer, revealed in the eleven page introduction, is profound. I urge you to read it.

In the continuing saga of synchronicity, in one of my current reads, The Creative Habit

, which predates Outliers, Twyla Tharp employs the same reasoning of Outliers to explain Mozart’s success. You can also read this by following the link, clicking Look Inside!, and entering Mozart in the search box.