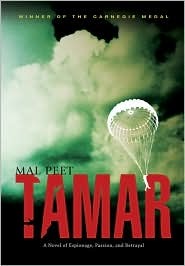 As with any good mystery, I immediately wanted to re-read Tamar to look for clues and to see the significance which I missed in the first reading.  The 1944-1945 story of two spies for the Dutch resistance, code named Tamar and Dart, is interwoven with the life of a young woman—named Tamar—in 1995 London, attempting to learn her Grandad’s and Gran’s shrouded personal history.

Grandad defends his silence: I happen to think there are certain things that are best left buried, that we should take to our graves with us. Terrible things that we have witnessed. I’m sure you disagree. You belong to a liberated generation; you believe in freedom of information.  Gulp.  This took me back to a moment around a table when I waltzed into our aunt’s memories of growing up in WWII Austria. “What was it like?” I probed, with no clue what my question cost. Aunt Anita was quiet, looked down, gathered herself, and then replied, “Oh, we really don’t want to get into that now.”

It is hard to write about the narrative without a spoiler. The espionage parts are intense; my muscles tensed while reading them. The nighttime ambush of Nazi SS Lieutenant General Rauter and retaliatory executions is true.

It was so damned hard to know what the old man was feeling. He was like one of those office blocks with tinted windows; you could only see in it you happened to look from a certain angle when the light was right. 5

The fear was on him suddenly, like a thin covering of ice over his entire skin. 65

Dart had become so unused to good feelings that he’d acquired the habit of examining them like a careful shopkeeper who’d been paid with a big banknote. 173

The teenaged Tamar finally connects with Grandad through algebra and crossword puzzles.

Grandad taught me that the alien signs and symbols of algebraic equations were not just marks on the paper. They were not flat. They were three-dimensional, and you could approach them from different directions, look at them from different angles, stand them on their heads. You could take them apart, and put them together in a variety of shapes, like Lego. I stopped being afraid of them.

I discovered that Grandad’s world was full of mirages and mazes, of mirrors and misleading signs. He was fascinated by riddles and codes and conundrums and labyrinths, by the origin of place names, by grammar, by slang, by jokes—although he never laughed at them—by anything that might mean something else.

He taught me that language was rubbery, plastic. It wasn’t, as I’d thought, something you just use, but something you can play with. Words were made up of little bits that could be shuffled, turned back to front, remixed. They could be tucked and folded into other words to produce unexpected things. It was like cookery, like alchemy. Language hid more than it revealed.

I’m not an expert in Young Adult fiction, but I question that slot for this book. It tilts strongly adult and not so much young. I have some other quibbles, but to bring them up here would spoil things.

Reading this fiction made me want to read Leo Mark’s non-fiction Between Silk and Cyanide, a book waiting patiently on my TBR shelf. I was delighted the Mal Peet acknowledged this title as very helpful in his research.

I wanted to read this book after reading Sherry’s review at Semicolon. Her Saturday Review of Books is a primary source of good reading!

3 thoughts on “Tamar, a Novel”