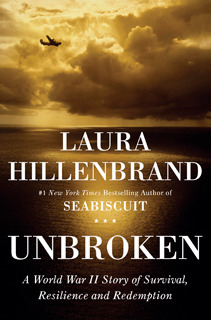 Even though I knew that Louis Zamperini survived insupportable agonies (this can’t be considered a spoiler: the word survival is in the subtitle), Laura Hillenbrand’s taut pacing of the narrative created and sustained tension as I read along. When I came to the point where—after having been officially declared dead then later confirmed alive, the war having been concluded, his fragile health jacked up above survival levels—Zamperini is escorted home by his brother Pete, the dam of my emotions gave way; spasms of sobs shook my frame.

Over Long Beach, they sank back into the rain and landed. There, bursting from army cars, were their father and mother, and Sylvia and Virginia. The moment the plane stopped, Louie jumped down, ran to his sobbing mother, and folded himself into her. “Cara mamma mia,” he whispered. It was a long time before they let go.

is the story of a series of rescues in Louie Zamperini’s life: how running rescued him from a mutinous youth careening with crime, the rescue from 47 days on a raft, how he was rescued from sadistic focus of a brutal war criminal, and the ultimate rescue of a tortured post-war veteran.

Zamperini’s story is worthy of an epic poem of Homerian proportions. Hillenbrand’s prose, however, is magnificent. Here are a few of her phrases which delighted my ear:

a festival of rapid-fire diarrhea

(prisoners) gathered in drifts against the buildings

this warren of captive men

the sea began to arch its back under the raft

Resilience is hard to detect in a body well nourished, well rested, and well kept. Resilience needs adversity, agony, and misery to have something to rebound from. Zamperini’s story is replete with deprivation, danger and destruction. Sharks, both human and piscine, seek to devour him. He offers bodily resistance as long as he is able. His indomitable spirit resists when his body is incapable.

In the midst of despair in an inflated raft in the middle of the Pacific Ocean, there is a day so exquisitely described which completely changed my idea about the doldrums.

It was an experience of transcendence. Phil watched the sky, whispering that it looked like a pearl. The water looked so solid that it seemed they could walk across it. When a fish broke the surface far away, the sound carried to the men with absolute clarity. They watched as pristine ringlets of water circled outward around the place where the fish had passed, then faded to stillness.

For a while they spoke, sharing their wonder. Then they fell into reverent silence. Their suffering was suspended. They weren’t hungry or thirsty. There were unaware of the approach of death.

As he watched this beautiful, still world, Louie played with a thought that had come to him before. He had thought it as he had watched hunting seabirds, marveling at their ability to adjust their dives to compensate for the refraction of light in water. He had thought it as he had considered the pleasing geometry of the sharks, their gradation in color, their slide through the sea…Such beauty, he thought, was too perfect to have come about by mere chance. That day in the center of the Pacific was, to him, a gift crafted deliberately, compassionately, for him and Phil.

Joyful and grateful in the midst of slow dying, the two men bathed in that day until sunset brought it, and their time in the doldrums, to an end.

Louis Zamperini’s story continues to the present (he is still alive and recently spoke at my friend’s church). It’s easier to end a book when the subject has died; there is a clearly defined finish. When the main character is still alive it takes more skill to bring the story to a conclusion. Laura Hillenbrand wraps this remarkable man’s story with one final scene. The significance of it escaped me at first. I went back and reread a paragraph. Oh!  Again, emotions pressed down hard to the overflowing point. The beauty, the profound and glorious beauty of this scene was the satin ribbon that tied this story together into a perfect bow. The final sentence undid me.