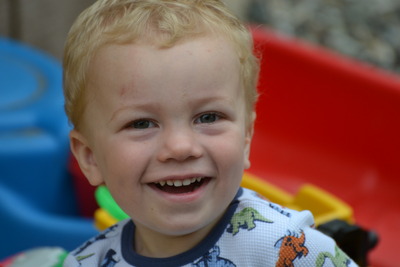 Remember those beginning biology experiments? The ones in which the outcome is a foregone conclusion, but you have to follow the steps of the experiment, write it up and turn it in?

I tried one of those last night. Not biology, but an experiment reading to a toddler from my Kindle.  All the time I had Dan Newman’s quote, “Maybe I’m a Luddite because I feel sorry for children who read “Goodnight Moon” on a phone.” in my head.  Knowing this would fail, I asked my 2 1/2 year old grandson, Noah, if I could read him a book.  Reading is a daily delight in his life and he readily acquiesced.

I picked up my Kindle, slid the power on, and pressed buttons. Thanks to Janet, I had Thornton Burgess’s Bird Book for Children on my Kindle. We started with Jenny Wren Arrives. Happily the first character is Peter Rabbit. Yay for familiarity!  But Noah is a mimic and if Nana pushed buttons, he wanted to push buttons too.  A book with buttons that he wasn’t allowed to push, pull, tap, or pound just made no sense.

The next hurdle was the lack of pictures.  In order to compensate for the visual wasteland, I tried to capitalize on the oral/aural parts.  I had Noah repeat “tut, tut, tut, tut, tut”; I gave “Jenny Wren” a Southern drawl, and had him say “JAY-nee RAY-in” after me each time the name came up. This morning when Noah woke, we continued the tuts and JennyWren’s.

But we only made it through four Kindle pages before I surrendered. Noah’s mom said she saw glimpses of cheerful panic in his eyes. We replaced the Kindle with picture books and all was well, again.

I could envision this working in perhaps four years with a bird coloring book and crayons.

Reading to a toddler with a Kindle.  Fail!  But I’d like to believe it wasn’t an epic fail.

2 thoughts on “Kindle for Toddlers”