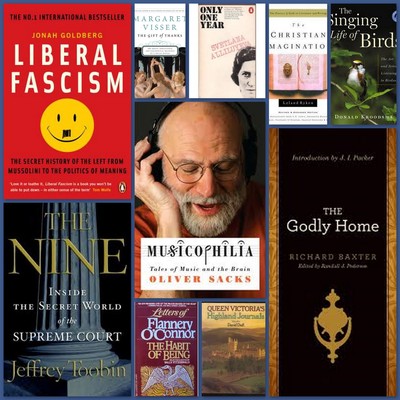 I saw this meme at Carrie’s blog Reading to Know.  She referenced Ronnica’s list. As I read I wanted to pull my hat down and my collar up and slink away.  Yep.  It wouldn’t be too much of a strain to come up with my own list.

I’m devoted to Paperbackswap.  Since books on my Too Be Read list are scrunched tightly on a shelf or stacked precariously by my bed or double-shelved in the guest room, I’m usually not in a hurry to get a book that I think I’d like to read.  I put it on my wish list and wait–from a month to more than a year–until a copy becomes available.

If I had to lay blame for this problem, while striving to keep my reputation unbesmirched, it would be on you readers who write such compelling reviews.  No mea culpa here; you are to blame!  Yeah!

What amazes me is how the searing heat of have to read it so quickly cools once the book is on my shelf.  Why does the acquisition thrill me more than ingestion?  But enough of philosophizing.  Here is my list of books I just HAD to have…still sitting (unread) on my shelf.

This undoubtedly made someone’s list of must-read books from 2008.  Tom Wolfe recommends it.  It’s been called the greatest book ever; it’s been called total bunk.  Which one is it?

•  The Gift of Thanks: The Roots and Rituals of Gratitude

I came up with the idea to read this book all by myself.  Margaret Visser is a classicist who writes charming social histories.  I sort of went gaga over Much Depends Upon Dinner.  When she wrote about gratitude, I had to have it.

is a book by Stalin’s daughter, who, for good reason, abandoned the surname Stalin and adopted her mother’s maiden Alliluyeva.  Russia interests me, as does World War II. There is great value in reading primary source documents.  One can read Hitler’s tripe (I did) and Churchill’s six volume set on WWII (I got through the first volume); but Stalin was too busy murdering millions to pen his memoirs.  So the daughter’s book is about as close as one can get to discovering the personal side of Stalin. She defected to the United States and lives today in Wisconsin.

is a book of essays on culture, art and faith.  People who own this book don’t swap it.  They must like it.  I got weary of waiting for it to become available by swap, broke down and bought it.  I have huge expectations from this book.  And because it is a collection of essays I could read small bits at a time.

•  The Singing Life of Birds: The Art and Science of Listening to Birdsong

When our friend told me that birds sing in dialects, that a song will have variations between regions, even valleys! it shanghaied my imagination.  A robin’s song in the south can be recorded and compared to a robin’s song in the west and the variations noted.  The concept thrills me, but I haven’t made time to read the specifics.

Richard Baxter is a Puritan pastor, a proven author in our home.  When I saw this updated and edited version (the Puritans do go on) it seemed needful to get it.

• Leaves from the Journal of Our Life in the Highlands

The diaries of Queen Victoria written both before and after the death of Prince Albert.  Primary document, a chance to get to know the Queen better, and best of all, Scotland!

• The Habit of Being: Letters of Flannery O’Connor

I am not (yet) a Flannery fan.  I have read nothing of hers.  I’ve heard boatloads of stuff about her, quotes from her, raves and non-raves of her fiction.  A friend recommended I start my O’Connor exploration with her letters.  There they are.  Waiting.

• The Nine: Inside the Secret World of the Supreme Court

When I put this on my wish list at Paperbackswap, I think I was 982 in line.  I’m curious what I will find out about nine of the most powerful people in America.

• Musicophilia: Tales of Music and the Brain

I started this book by a neurologist and found it very engaging.  I’m not sure why the engagement was broken, but I do want to find out more about the connections between the music and the brain.  The story of the surgeon who was struck by lightning and consequently developed an insatiable thirst for classical music was simply amazing.

One obvious reason why the books are still waiting is that except for Baxter and the Queen, they are all close to 500 pages.  Writing this blog entry has piqued my curiosity…again.  But I have a book to finish before I can get involved in one of these.

If you had this stack by your bed, which one would you pick up first?

And, of course, if you have a list of boughten but languishing books, I’d love to read it.