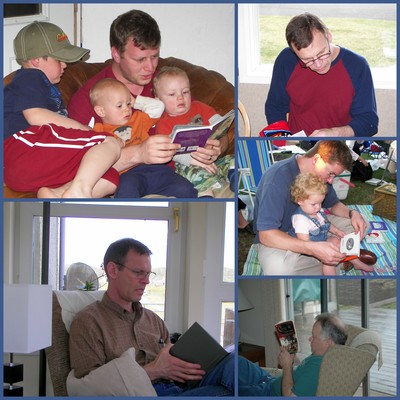 There are legends about my father’s office.  Books on every wall, stacks of books covering the floors with only a narrow walkway between the door and the chair.  Forget overstuffed chairs, this was an overstuffed office. The most magnificent thing was Dad’s ability to navigate the chaos!  He could find a book within two minutes.  He’d stare at the ceiling for ten seconds, get up, scan a shelf, and pick out the requested title in nothing flat.

Very occasionally I would happen to be awake before my father left to teach his 7:00 a.m. class. He never exited the house empty-handed. Shoot, he never left the house with just one or two books. I believe that four was the minimum number he carried back and forth. Though he wasn’t what anyone would call athletic he was acrobatic when it came to balancing tottering stacks of books.

One more Papa John story: at the time of his death, my father had moved into a larger office with more bookshelves than he’d ever before enjoyed.  No books on the floor. We estimated his personal library of books to be around six thousand volumes. Oh boy! that’s a knee-slapper! He double-stacked books; the number was over ten thousand volumes.

He managed to pass a love of books and of reading down to all seven of his children. Every level of every child’s house has books. He converted many students into bibliophiles. He read books, he recommended books, he gave books.

No wonder, then, that I find it attractive (and pathologically normal) to see a man reading a book.  Guys have all sorts of interests: cars, guns, gardens, sports, finance, etc.  But let a man initiate book talk and he becomes instantly more handsome.