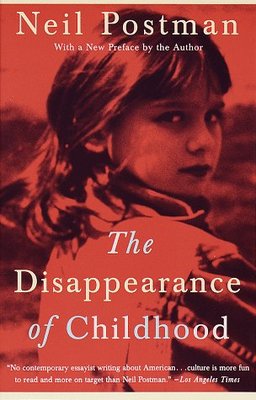 Children are the living messages we sendto a time we will not see.

Since reading Amusing Ourselves to Death

, I’m a sucker for anything Neil Postman writes.  His books are provocative, engaging and challenging.  While Postman chronicles many technological advances and their effects on children, he focuses on television, especially contrasted with reading as a source of information.
We may conclude, then, that television erodes the dividing line between childhood and adulthood in three ways: first, because it requires no instruction to grasp its form; second, because it does not make complex demands on either mind or behavior; and third, because it does not segregate its audience.
What Postman prophesied in 1982 has come to pass; the fundamental tenets apply to a culture of texting, tweeting and Facebook updates.   He says we have adultified children (in dress, entertainment, food, clothing and language) and childified adults (in same areas).

Postman paints a bleak picture.  What he suggests is to limit media’s access to children (not the other way around, hmmm) both by limiting exposure and content and by always critiquing what you watch/hear with your children.

But America has not yet begun to think.
The shock of twentienth-century technology
numbed our brains and we are just beginning
to notice the spiritual and social debris that our
technology has strewn about us.

From this book, I gleaned one of my all-time favorite quotes:
Watching television not only requires no skills,
but develops no skills.
As Damerall points out,
“No child or adult becomes better at
watching television by doing more of it.
What skills are required are so elemental
that we have yet to hear
of a television viewing disability.”

Since I read this book, I’ve noticed other people noticing the loss of childhood: this New York Times op-ed piece, this tabloid cover I saw at the grocery store. 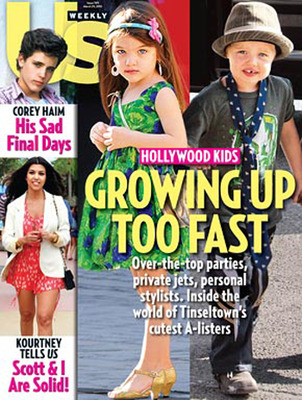 While it is easy to cluck-cluck at this sort of thing, what is required is major resistance to our culture.
Resistance entails conceiving of parenting as an act of rebellionagainst American culture…To insist that one’s children learn thediscipline of delayed gratification, or modesty in their sexuality,or self-restraint in manners, language and style is to place oneself in opposition to almost every social trend.
The Disappearance of Childhood

8 thoughts on “The Disappearance of Childhood”