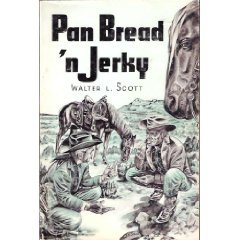 The first books, other than the Bible, that I owned–the seed corn of my personal library–were the Little House books by Laura Ingalls Wilder. My dad and mom, both avid readers, gave them to me as soon as I could read. I received a beautiful hardbound copy of the next book in the series each birthday and Christmas. I read and re-read these treasures countless times.

So it makes sense whenever I read a “pioneer” story to have a flash of recognition, like seeing a long-lost cousin as a grown-up instead of a child. Written in 1968 by the 84-year old author, Walter L. Scott’s book Pan Bread ‘n Jerky

is a rustic autobiography of a settler who saw a lot of life here in Eastern Oregon.

I call it rustic because the writing is choppy and lacks cohesion.  The author’s eighth grade education isn’t the problem as much as lack of editing. Rustic, because it describes a rough life.  Not unhappy, but full of the vicissitudes of living in a wild country.  Food was hunted, trapped, gathered, and gleaned, seldom purchased.  The pioneers were scrappy folk who eeked out a life any way they could from the land.

Walter Scott was a horse man.  Many times he earned his bread by handling horses. My favorite sentences of the book:

Horses have played an important part in my life since I was a colt myself.  Many times I’ve been on a horse when I went up but there was no horse there when I came down.  I’ve been bitten, kicked, struck, stepped on, run away with, treed on a corral fence, and had horses fall on me, but I still like horses.

The stories remind us that the “good old days” had their share of sorrow and tragedy. Gold mines used cyanide in the 1890’s and dumped it into the rivers.  A boy lost both legs from cyanide poisoning after wading in the water.  Snowslide, homicides, horse rides, suicides all snuffed out lives.  But there are huckleberries, sage grouse, snowshoes, and horses which mitigate the austerity. 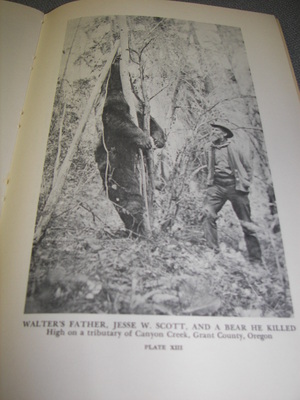 This a bear killed by the author’s father.

The bonus for me is that all the locations of this book are…local.  Believe me, you East Coast and European friends, not many books are located in Eastern Oregon.  (Okay, I forgot about The Shack.)  Getting a glimpse of life here a hundred years ago was worth the wade through the problematic prose.

6 thoughts on “Little House on the Oregon Trail”