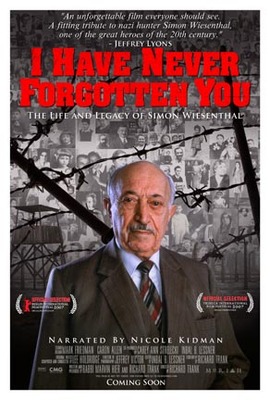 He didn’t mask his disappointment.  It’s a documentary?  Exhausted from a long work week, my husband anticipated a light comedy … something … easy.  Three minutes into the movie we were fully engaged, and flat out in love with Simon Wiesenthal.  When the credits rolled, we wept in silence, wrapped in a shawl of sorrow.

Why was this movie so appealing?  It taps into our sense of justice.  N.T. Wright writes, “…we all share not just a sense that there is such a thing as justice, but a passion for it, a deep longing that things should be put to rights, a sense of out-of-jointness that goes on nagging and gnawing and sometimes screaming at us…”

I Have Never Forgotten You tells Wiesenthal’s story with a montage of archived interviews, televised speaking engagements, and biographical narrative.  Blessed with a steel-trap memory, this Shoah survivor weighing 99 pounds was able to sit down and write ninety names of Nazi war criminals soon after he was liberated.  With his role in finding Adolf Eichmann, Simon Wiesenthal’s fame as a Nazi hunter grew to international proportions.

This was a man of sorrows, acquainted with grief.  Sorrow was not only a daily companion, but an essential part of the man he became.  He made room for it in his life; he didn’t try to deny its existence or keep it locked up in the cellar of his soul.  His eyes welled up often.  He was a grief-carrier, and the grace with which he carried his grief is truly a thing of beauty.  He was warm and jovial, a joke maker and a story teller.  And his smile…his smile melted my heart.

I knew the name, had heard some stories.  I expected a man of intense, slow-burning anger, a vigilante bent on revenge.  But there is a vast difference between revenge and justice.  Solid in the face of opposition, Wiesenthal worked tirelessly; courageous when attacked, he methodically organized the avalanche of information, determined in his duty, persistent to the end.  Ben Kingsley said that he was an instrument of healing for thousands of people.

This is the best movie we’ve seen in 2009.  I highly recommend it with the caution that there are Holocaust images and content.

6 thoughts on “I Have Never Forgotten You”