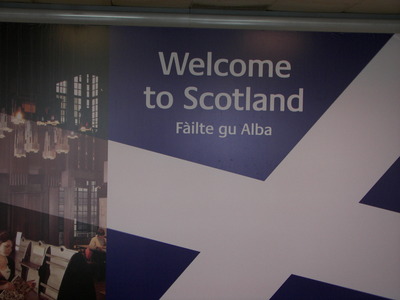 The flight:  was delayed leaving
Seattle and was an hour late coming into London’s Heathrow airport.  We felt
certain we would miss our connection to Glasgow at Terminal 5 which seemed like a
three mile bus ride away from our arrival at Terminal 4.  However, they held the
connecting flight to Glasgow (not just for us, but because of delays) and we made the plane.  Yay!!  Unfortunately, our
checked luggage did not make it.  We carried on important
things like books to read and journals to write in,
computers, ipods and headphones.  We did not carry on extra
underwear, toothbrush or a change of clothing.  Thus, a lesson
learned.

**Addendum** I failed to add that we picked up our luggage which was delivered to our first B & B on Saturday night.  What a relief it was to wear clean clothes!  We’d been wearing the same clothes since Wednesday morning. Yikes!

The car:  a Kia cee’d
(that is what it’s called, I kid you not) is our rental car.  It
gets 48 mpg, drives wonderfully, and is compact outside and roomy inside.  Curt
was nervous about the right hand, left lane MO in Scotland.  The first problem,
however, was figuring out how to get it in reverse.  He yanked, tugged, pulled,
pushed, cranked, yelled, and we kept creeping forward out of our car park
space.  I tend not to worry about trivial things like how to go backwards and
urged him to just drive away and figure it out later.  Curt refused to go
anywhere until he could back up.  The car kept moving forward and other cars
kept swerving around us in this dense car park.  Aha!  There was a sleeve you
had to push up and then the happy little gearshift knob moved into reverse.

In praise of shoulders:  Curt has
wonderful shoulders.  He handled the initial (and continuing) stress of driving
wonderfully well.  He copes well in the traffic.  The roads in Scotland, alas,
have no shoulders.  None.  Nyet.  Nada.  It is a rock wall, narrow lanes and
another rock wall or forest or store.  The driveways in America are wider than
the roads in Scotland.  Once you get off the M roads (dual carriage, which means
divided highway) the smaller roads often narrow to one lane and one of the
drivers has to pullout and let the other pass.  Also, passing in Scotland is
forbidden most of the time.  Instead, the slow-mo driver needs to pull out when
another driver is on your tail.  A large sign with the letter P signifies a
pullout.  Curt would say, “I need a P” meaning he had a car wanting to go faster
behind him and we needed to move over the next turnout.  It took a while for me
to catch on: I kept looking for bathroom facilities!  A few bounces on the left
curb were the only bumps in our road.
Scotland scenery:  This country
feels like home in some ways.  The scenery is very similar to Oregon.  As we
drove we would say, “Look, there’s Wallowa Lake.”  “That looks just like the
sides of the Columbia Gorge.”  “Oh my, that’s the Snake River.”  The
dun-colored, treeless hills are just getting ready to green up.  The mountains
surprised us.  The country feels very, very large.  There is water (lochs,
rivers, firths) everywhere.

4 thoughts on “Getting There”