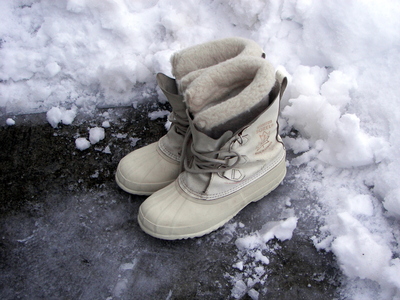 To make a short story long:

What differences my husband and I have had over economics usually has stemmed from our families’ disparate philosophies of purchasing.

My husband was raised buying Sear’s Best.  Bottom line: the best quality you can afford.

We have worked through most of the quirks that arise from our differences.  When we see a Dollar store Curt says, “Break the cycle, Carol, break the cycle” and flat out REFUSES to stop!  I still gasp when he buys gortex hunting pants…”for HOW MUCH?”

Buying shoes (for us as individuals and for our children) threw us into the midst of the cost vs. quality conundrum.  I just groan at the thought of paying more than $15 for a pair of shoes. Still.  When Curt was teaching, standing on a cement floor all day, we paid obscene amounts for Rockport shoes on his $18,000 salary.

When it came to snow boots there was only one brand worth considering: Sorels

with removable felt liners.  I argued “They’re just little boys! How did my four brothers survive without Sorels?”  Curt was unmoved.  I gulped and started to watch for sales.  So we bought Sorels every year for our growing kids; we scored two pairs at a garage sale but canceled that out eight years later by buying a size we already owned.  The powers that be decided that I needed a pair of Sorels for my dear big feet. Moi?  Si vous plait!

I think I objected to their ugliness even as we plunked down the bucks.  But there were some winters when they most certainly kept my feet warm.  Here’s the kicker: when the boys reached that size, they had to wear these ugly white boots that year!  (guffaw, guffaw)  Dear Christopher was attending public school when his feet reached women’s size 10 and he took no end of guff from his classmates.  He had to suck it up and grin and bear it.  When I was a child we called that “good missionary training.”

Those ugly white boots have been hibernating for at least four or five years, banished to some secret cubby in the garage.  But DH retrieved them today so I could start walking outside in between afternoon blizzards.  Dear Dana convinced me to join her on the Idita-walk.   I have access to a free gym, but there’s something wonderfully bracing about the fresh air and plowing through the snow feeling like Madam Shackleton.  I’m listening to Einstein

while I walk which is an utterly ludicrous proposition.  Not that I’ll “Get It”; perhaps quantum physics will distract me.  Maybe I’ll snap some pictures.  The Idita-walk officially begins February 1. I’m already cheating and adding today’s minutes in the total. Check my progress on the sidebar box.