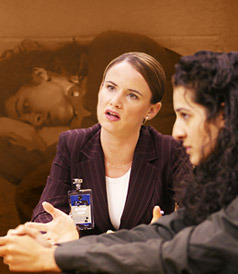 My sister Margo and I often compare Netflix notes during our phone conversations.  She recommended Chasing Freedom, the story of an Afghan woman seeking asylum, with the caveat that it was hard on the emotions.  There is one unpleasant scene of a beating, which earned the movie an R rating.

I was interested simply because it was about Afghanistan.  Ever since I’ve read The Kite Runner, my heart has been turned toward the Afghani people.  Chasing Freedom has several domestic scenes from Meena’s life in Kabul.  Just getting a visual of a (surely recreated) Kabul street and neighborhood was valuable for me.

The story focuses on two women. Meena Gardizi, an young Afghani woman
who is seeking asylum from the Taliban regime in Afghanistan, arrives in New York only to be held in a detention center which looks much like prison. Libby,
the attorney who takes the pro bono case in order to pad her resumé, is introduced as a big-shot lawyer who eventually realizes that she’s not good enough. The softening-of-the-lawyer theme reminded me of Regarding Henry.
Watch Libby’s hairstyle as the movie progresses.  The big draw in this
movie was Layla Alizaba in the role of Meena.  She played a wide range of emotions with understated intensity and created a very sympathetic character.

While I enjoyed the movie, the plot lacked contour.  Later I noticed that it was a made for television movie; that made sense.

Our family is always looking for the message, the point, the telos if you will, of the movie.  Obviously the producer believes America should have a different system for checking and detaining immigrants. This movie about immigration and asylum portrays the INS in a poor light, typical jail-keepers. While it plays on the emotions, we need to think clearly. It could be a great springboard for discussing the pros and cons of our current immigration policy.