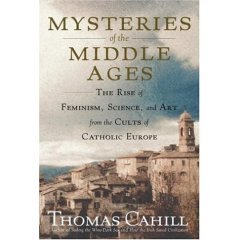 Thomas Cahill is on a mission.  In his series, The Hinges of History, he is telling the story of Western Civilization in the context of gift giving.
But history is also the narratives of grace, the recountings of those blessed and inexplicable moments when someone did something     for someone else, saved a life, bestowed a gift, gave something      beyond what was required by circumstance.
After his books on the Irish, the Jews, Jesus of Nazareth, and the Greeks, Cahill turns to medieval history.  He focuses on the story and influence of a few people:  Hildegard of Bingen, Eleanor of Aquitaine, Francis of Assisi, Abelard and Héloïse, Thomas Aquinas, Chaucer, Giotto and Dante.

Cahill’s Mysteries is very accessible, an easy to read book classified as pop history.  Without becoming too facile, he employs non-academic words, current idioms, and recent events in his writing: calling the Franciscans the first hippies, comparing earlier Islamic-Christian conflicts with the 9-11 attack by bin Laden and the war on Iraq.

To name a child Astralabe [speaking Abelard and Héloïse’s love child]      was to suggest that he was destined to be a very modern (and starry)        trendsetter. It brings to mind the avant-garde rock musician Frank Zappa,
who named his daughter Moon Unit.

The book contains many rich, colorful illustrations and photographs, especially of the art he reviews.  His style of footnoting is my absolute favorite: on the same page on a side column in a slightly smaller font.

The biggest blunder of this book is its title.  There are no cults in the book and the mysteries invoked in the title are intended to denote a sacramental wonder.  The subtitle doesn’t work at all.  At the end of the book Cahill looks at the current state of the (Roman) Catholic church.  I sense that a love for the (his?) church is the motivation for pages of text on the current priestly pedophilia crisis.  He argues for optional celibacy (married clergy, I think) and popular election of clerical positions which are now appointed.

I don’t think Cahill has ever matched the quality of work he did in How the Irish Saved Civilization.  I am grateful to have read Mysteries for two particular reasons:  His resounding recommendation of Kristin Lavransdatter; and his last two chapters on Dante which have primed my pump for reading The Divine Comedy.

But I am thankful that I didn’t buy this book.  One read through was enough.