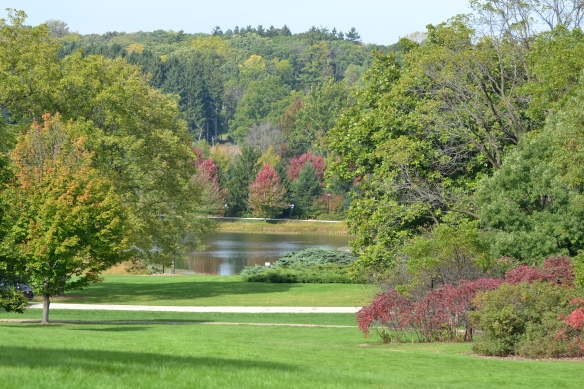 Morton Arboretum, the closest photo I had to landscape architecture

I have all my life been considering distant effects and always sacrificing immediate success and applause to that of the future. In laying out Central Park we determined to think of no result to be realized in less than forty years. — Frederick Law Olmsted

So many surprises in A Clearing In the Distance. Olmsted was an autodidact. A slow starter, a dabbler in disparate enterprises, he kept afloat with his father’s loans. He himself was his father’s ‘Central Park’, the long investment whose glories would become apparent in the future. Fame first came as a journalist. He sailed to China; he bought a farm; he traveled to Europe; he started a magazine; he managed the largest gold mine in California.

It is the breadth of Olmsted’s curiosity that makes his writing compelling.

His genius was made manifest when he, along with Calvert Vaux, created New York City’s Central Park. After that, Olmsted designed other huge city parks, the suburb of Riverside, IL, university campuses, cemeteries, the U.S. Capitol grounds, the World’s Fair in Chicago, and the Biltmore Estate. I enjoyed reading about the projects he didn’t get: Golden Gate Park, the city of Tacoma, WA.
The ability to think on a large scale, to project himself into the future, and to quickly master broad issues were skills Olmsted acquired while he was directing the United States Sanitary Commission, managing the Mariposa Estate, and chairing the Yosemite Commission. All these projects depended on his ability to digest and organize large amounts of information, and to integrate diverse requirements. All involved planning in time as well as space.
The timing of my reading was delicious! In some ways this is the daylight to the darkness of Jacob Riis’ How the Other Half Lives. Riis writes extensively about the Children’s Aid Society, started by Olmsted’s closest friend, Charles Brace. Olmsted’s work on Central Park was more civic than aesthetic, giving residents the space to soak up sunshine and fresh air.

Other reading intersections: Erik Larson’s The Devil in White City made me thirsty to know more about FLO. Michael Pollan referenced Olmsted’s ideas in Second Nature. By chance, I’ve landed in books set in the late-19th century. The wider I read, the greater my familiarity grows and the joy of recognition sparks.

Finally, I believe growing up in Lombard, IL, walking through our own Lilacia Park, designed by Jens Jensen, and nearby Morton Arboretum, a 1700-acre tree museum, predisposed me to love this book.

For myself and those interested in cultural history: 5 stars
For those who like biographies, history, and books with an index and maps: 4 stars