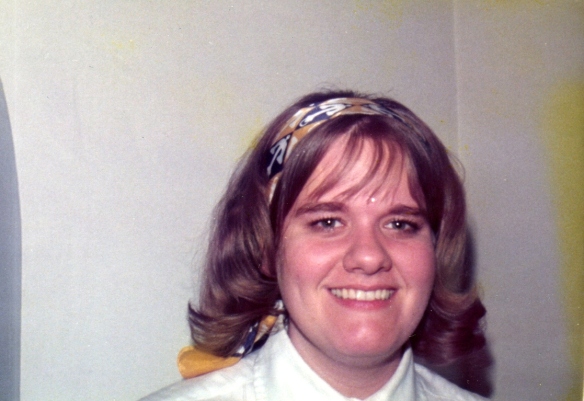 I’m repeating myself. Let’s go back to childhood and try and remember some things about Margaret.

First off she was much older than myself.  6 whole years.  At that age, 6 years seems like an eternity.  Along with Dorothy and David, she seemed much older, cooler, and smarter than I would ever be. She had interests and knowledge I could never match.

But we shared one huge event as a family.  The death of my mother when I was 13. In many ways this shaped all of us because my mom was the anchor of our family and to lose her at such an early age brought many changes.  One random memory from that time is a chicken dinner which Margo prepared. (And maybe Dorothy was involved. I plead teenage male goofiness). This was fried chicken in some kind of cake batter that puffed up as it bubbled in the oil in a cast iron skillet.  We shared a love of good and wonderful food.

Later, she went to nursing school and took her first job at Belmont Hospital. After living in an apartment overlooking the Eisenhower Freeway with all the noise and traffic she moved to 804 S Euclid in Oak Park which was a two flat also known as the Harper Hilton. Two older brothers, David and John, lived in the upstairs flat and Margo along with various roommates lived downstairs.

In 1977 I moved in upstairs and little knew how much Margo would change my life.

Through sheer ineptitude I managed to flip a 3 wheel construction cart on my left foot and was off work for a month or longer. During this time Margo, Bette Unander (now Smillie) and I visited my brother Jim and his wife Kathleen in Portland, Maine.  We took the tour of Boston, parts of New Hampshire, and Maine where Jim and Kathleen gave us a royal visit of that wonderful state.

As I recovered from my foot injury I had time to prepare late night steak bbqs for Margo and Bette when they came home from the 3 to 11 shift.  Our bonds as brother and sister grew especially in the Tuesday night Bible study that met downstairs in their apartment.

At this time I was taking voice lessons, singing solos in a large church choir, and being a member of the Chicago Symphony Chorus.  Margo encouraged me in my singing and attended many concerts with our circle of friends, mainly from the Tuesday night Bible Study.

It was during this time that Margo developed severe headaches. While visiting my brother David she had to be taken to Pittsburgh for treatment but the brain tumor was not discovered for some time.

In the early summer of 1979 the pain was even worse and finally she was diagnosed with a severe and dangerous brain tumor which she decided to have the needed surgery at Mayo Clinic.  While she was there she called me and asked if I would give a ride to a co-worker that wanted to visit her for that week in Minnesota.  I gladly agreed and gave Valeri Kijak a ride up to Mayo Clinic. (And my life was changed forever!!)

Margo had many radiation treatments and at the end of those we planned a celebratory lobster dinner (sent by my brother Jim from Maine).  It was during this dinner (ironically before we ate the lobster) that Margo had a seizure.  This was in September of 1979 and for Margaret the prognosis looked very grim. Later, the whole Harper clan all gathered at brother David’s house for Christmas and most of us thought this would be Margaret’s last Christmas.

God had different plans.  For some unknown reason Margo’s body enveloped the brain tumor and stopped its growth.  But the damage from the treatment had taken a toll on Margo’s body.  She was told that from then on her life would be very limited.

Margo did all those things.
Work two different jobs.
Buy a new car. And drive it.
Buy a condo on her own.

But.  The damage from the cure was tremendous.  Margo’s body was never the same again. Her amazing piano skills were never the same. She had much difficulty in moving and having the stamina for being a nurse.

Here’s where we need to learn what Margo knew all those years ago: God’s way is best even when we don’t understand.

Bitterness only eats up those who are bitter.
Each day is a blessing even with all the challenges that Margo faced.

In the midst of this God sent a gift to Margaret in the form of John Walker. John loved Margo for who she was including the physical deficits because he saw the real Margo that was hidden behind those physical problems.

We think of fairy tales as the young prince who carries off his young bride in some idealized Hollywood movie. Let me give you another version:

A 40-something cancer survivor meets a young man who sees the fairy princess locked up inside her own body and loves her for who she is.

THAT is a movie I want to see. John has been a  faithful and loving husband to his bride, Margaret.

In the last conversation I had with Margo a month or so ago she amazed me with her wit and intelligence and I hung up the phone exhilarated and rejoicing in who Margo was. And is. I selfishly would love to have that conversation with Margo again but I know that as of right now Margo is in the presence of her Lord and Savior.

Free from pain.
Free from limitations.
Free from a body that served her well but imperfectly.
And at rest and at peace with her Lord and Savior, Jesus Christ.
Amen.

4 thoughts on “A Different Kind of Fairy Tale”