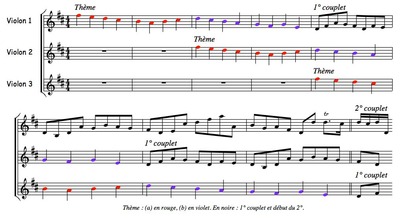 [This post will alienate most of you, my dear readers. Be warned.]

Two weeks ago I played the piano for dear Anna’s wedding. Anna’s uncle and aunt, extraordinary musicians from Georgia, played violins. We had a sort of impromptu string trio. As we were reviewing music for the prelude, Uncle John, fiddling around, played the familiar phrase that begins Pachelbel’s Canon. I shuddered. Fixing a glare, pointing my index finger, I proclaimed “This will be a Pachelbel Free Wedding!!”

For a moment I rested my face in my hands.

“I’m sorry. It’s just so overdone…”  I barely knew these people and here I was issuing commands.

John grinned. “Why do you think we know it by heart?”

“So you don’t really want to play it?”

“No.” One syllable conveyed his meaning, make no mistake.

I exhaled and sighed at the same time.  “We are on the same side of the river?”

Pachelbel’s Canon in D is the original three chord, twenty-two verse ditty. Exquisite the first seventy-three times you hear it. The seventy-fourth time, however, it loses its charm. Wedding musicians are bone weary of this piece. How many bridesmaids in the world have hesitation-stepped down an aisle to Canon in D? Somewhere beyond twenty-six million is my guess.

It’s time to stop the madness, people. If the bride or groom request Pachelbel, I will gladly (and sweetly!) play Pachelbel. But when I am asked to choose the music, it is good-bye dear Johann, I wish you well.

Back in the day, Paul Stookey’s Wedding Song was the rage. Practically a one note, one chord, monoculture of a song. Pick a note, a low note you like, and sing it three times to the words “There is love.” Then repeat the same note with “There is love.” Three same notes yet again to make sure the audience knows there is love. It finally fell out of favor. It has been a happy twenty-five years since I’ve heard that gem at a wedding.

It’s time to give Pachelbel’s Canon a well-deserved rest. Let our great-grandchildren rediscover it.

John, Rebecca and I played a postlude until the last row of guests were leaving their seats.

“It’s a wrap!” I gratefully smiled. It’s always a relief to not have muffed it up.

In muted tones, with a twinkle in his eye, John played the opening notes of Pachelbel’s Canon.