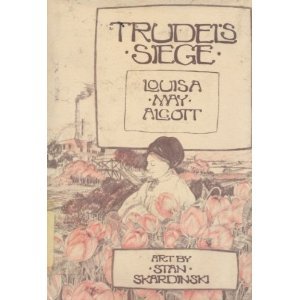 If children can keep their wits about them and are brave,
they can always help in some way, my dear.
We don’t have such dreadful wars now; but the
dear God knows we have troubles enough,
and need all our courage and faith to be patient
in times like these.

, a book written by Louisa May Alcott when she was sixteen (1848), sickness, poverty and hunger lay siege on Trudel’s family. Her father, a linen weaver, is too sick to work; her mother, a lacemaker, cannot work while she nurses her husband; the old Grootmoeder could only knit stockings to sell. Inspired by the story of the siege of Leiden, Trudel looks for ways she can get food for her family. She gives her precious kitty, Jan, to the baker’s family in exchange for bread, sausage and milk. She goes out looking for odd jobs she can do in exchange for food.

I can hear modern objections to this story: Why isn’t this girl in school? No child should have the burden of providing for the family! Where were social services?

I actually find the self-reliance, tempered with faith in God’s provision, very refreshing. So it’s a twinge too earnest. Trudel struggles with her sacrifices…for one minute. Such selflessness is usually only found in books. But Trudel’s satisfaction—her compensation—comes as she sees her parents and grandmother’s hunger abated. Alcott improves with age: who can forget Jo March’s satisfaction/sorrow when she sells her hair? 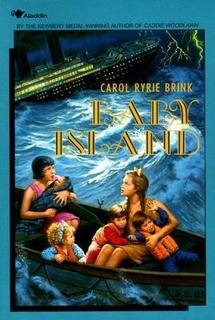 : the Young Mommy Edition. I found the Foreword essential for a modern reader to get this book.

When I was a small girl, it was the fashion in our circle
to borrow the neighbors’ babies. I myself was never a
very accomplished nursemaid, although I had many happy
hours pushing the perambulator of a young cousin; but
some of my friends had a positive genius for taking care
of and amusing babies. They never thought of receiving
pay for this delightful pastime. Minding a baby was its own reward.

When the ocean liner is sinking, twelve year old Mary Wallace’s first thought is to save the babies she has made friends with. She wakes her sister Jean, ten, and they find the twin toddlers and three-month old baby unattended. After scooping them up and getting in a lifeboat, a father gives them another toddler to hold while he returns for his wife. Suddenly they are cast off and adrift on the ocean.

Mary is certain they will reach a little island.

Why the public library at home is just full of books about
shipwrecked people who landed on tropical islands. And
did you ever see a book written by a person who was
drowned at sea? I never did.

Whenever Jean gives way to tears, Mary rallies the troops:

Remember who you are.
Remember you are a Wallace.
Sing ‘Scots, Wha Hae wi’ Wallace Bled!’
and you’ll be all right.

The supplies, especially the canned milk, in the lifeboat sustain them until they land on a island. They build a shelter, find more food, build a pram and a playpen, while the baby gets a tooth, the toddler learns to walk and the twins start talking. They learn very practical knowledge of tides, “more today than I ever learned in school.” Mr. Peterkin, an old curmudgeon, lives on the other side of the island with his goat and parrot.

It’s a whimsical book. Diapers—the need for or the stink or the cleaning of—are never mentioned. And yet I find parts of it plausible. When I was twelve, another twelve-year-old and I ran a day care center for the counselors’ kids at a summer camp. I marvel now to think of the responsibility we had, but at the end of the week all was well.

What I loved about this book was the way Mary Wallace thought of the needs of others and how that kept her occupied and how her occupation kept her form sniffling and whining. Carol Ryrie Brink writes that her grandmother is in every book. Caddie Woodlawn

is based on her grandmother’s childhood, but the spunk and resourcefulness of Mary Wallace is another clear reflection.

It strikes me that in both titles the girls are fortified by stories from books.  We must never stop reading good stories to our kids.