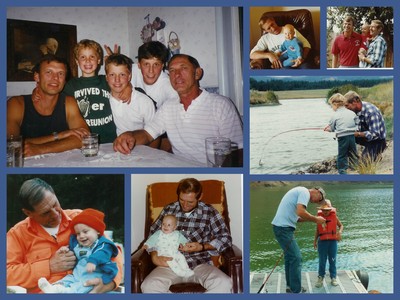 The short answer: a bunch.

When I consulted with my 19-year-old self, I decided that one vital point I would look for in a potential husband was a guy who had a robust relationship with his dad. I craved children; even more, I wanted a man who would be a good father to those future children. Specifically, I wanted a man who had lived with an example of strong leadership, who knew firsthand what a good dad looked like; a man who wanted to be like his father.

[Disclaimer: I know that men who have had passive, indifferent, distant, or abusive fathers are capable of being good dads.]

Thus, when I talked to a guy who dissed his dad, I drew a mental X next to his name: Disqualified.

When Curt and I started going out, he was working summers with his dad. He came to take me to dinner in his dad’s brand new Triumph Spitfire. There was a confidence and respect that flowed between those two men. Curt introduced me to his parents very early in our relationship. When it came time to marry, Curt did not hesitate in choosing his Best Man: “my Dad“. After we had children, we moved nine hours to our current location (where Curt’s folks lived) in order for our kids to live close to their grandparents. Curt and his dad formed a partnership and worked together 12 years. Ever since Curt was old enough to hold a gun, they have hunted together.

“Dad” poured himself into Curt, and through the man his son became, my sons and I have reaped a boatload of benefits. What did Curt learn from his dad? Motivation to work; equilibrium expressed in the family motto: Let’s get the work done and then have fun!; a willingness to confront tough issues and pursue resolution; the courage to be unpopular; stubbornness; unflinching sacrifice; bluntness; the beauty of order; affection; fidelity; compassion; service; laughter.

1 thought on “What I Owe My Father-in-law”