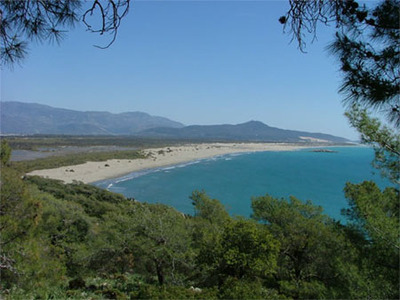 With two chapters left in Frances Mayes’ A Year in the World: Journeys of A Passionate Traveller

I am reluctant to come to an end of this book.  As much as I tried to slow down and savor the cultures, I’ve read it too quickly.  Initially I explored points and people of interest, like Spanish guitar composer Angel Barrios (follow the link…it’s two minutes you won’t regret).  But much of my reading was done when the computer was turned off. I would like to revisit A Year with my laptop, using Google and Youtube to see more.

Last night I was reading about a reunion of friends in Scotland.  When Mayes described girlfriends Kate and Susan who opened the first bookstore-with-a-café, Printers Inc., in 1978, in Palo Alto, I had a jolt of recognition.  Their bookstore was described in a book I read last month, The Yellow-Lighted Bookshop

.  The author of YLB, Lewis Buzbee, worked at Printers Inc. and named Kate and Susan in his book.

This morning our New Testament reading and sermon were from Acts 21.  It opens

21:1 And when we had parted from them and set sail, we came by a straight course to Cos, and the next day to Rhodes, and from there to Patara.  (underlining mine)

I came home, drowsy and droopy, picked up A Year in the World and continued to read the chapter on Turkey’s Lycian Coast.  Turn a page and we’re in Kas.  Next page Patara Beach.

Silky long-haired goats graze among the foundations.  Three brown-bearded ones pause and look up, as if to say, What brings you here?  Mustapha sees us coming and sends the dinghy.  We board in the same spot where Saint Luke and Saint Paul, that most peripatetic traveller, having landed here from Cos then Rhodes, found a ship to take them on to Phoenicia.

Though not uncommon, these moments of synthesis never fail to delight me.  Sweet!