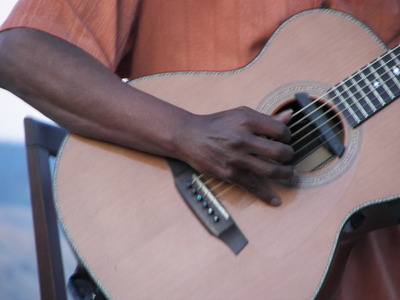 I liked the album cover

I clicked the 30 second samples; immediately I called my husband to join me.  “Listen to this guy– (consulting the screen)…Eric…Bibb.”  After listening to a few licks, Curt said, “Get that CD.”

People say I sing the sunny side of the blues.So I’m going to start off tonight with a song calledGoin’ Down Slow.
We thought we had discovered this “unknown” and started talking him up to our friends.  Turns out, they’d been listening to him for years.

Wow.  I’ve played a lot of places in the world, but this is the most unique venue.I grew up in Queens, and you just don’t seesights like this when you live in Queens.
I feel like I’m on an album cover.
In January 2008, Bibb came to Sandpoint, Idaho, six hours away.  It was close enough.  Friends banded together and we drove through an epic snowstorm for a magical evening.  Unforgettable.  A month ago we learn that Eric Bibb would again be in our region.  Anticipation.

A thought occurs to someone brilliant: why not bring him to the Rim for a concert?  Sitting on the edge of Joseph Canyon, The RimRock Inn is what’s called a destination restaurant.  Our friends have worked hard to make a meal at the Rim an exquisite occasion.

[About four measures into a song, he stopped to retune.]
Tuning a guitar is just like airplane maintenance:
it’s always worth it.

They seated 80-100 people on the outside deck with Mr. Bibb on a platform five feet away.  He introduced each song with a story, some background or introduction.  He plays some thumping 12 chord progressions, clap-along, foot-stomping songs.  But he truly excels, I think, with love ballads that make you want to hold the hand of the one you love.

Marital bliss and conjugal harmony
are not normally considered
suitable topics for the blues.

The sky was a robin egg blue.  The temperature teeter-tottered between perfect sleeveless and grab a sweater.  Our friend Darrell Brann opened with a full repertoire of crowd pleasers. The aroma of fresh bread was followed by a salad with crumbles of chevre; prime rib and baked potato entered; dessert was your choice of rhubarb, marionberry, pecan, apple or mud pie.

My mother is a wise woman.  I haven’t always taken her advice,but when she heard this song, she told me that I should includeit in every set I play.  And I’ve done that for twenty years.A Swedish gospel singer asked me to write it; she wantedto sing a song with a blues feel and she wanted to sing in English.So here it is: a Swedish-gospel-blues-in-English song.

During the intermission and after the concert there were opportunities to talk to Eric Bibb and his wife.  I told him one of his newest fans is my friend’s mom, who recently received a terminal diagnosis, whose days are numbered.  He asked me to pass on his greetings.

Isaiah and his folks were at the concert.  Isaiah, saved from a deadly brain injury.

Afterwards my good friend leaned against the railing looking out towards the horizon, tears on her face.  She said, “I didn’t know any of the people he mentioned in his song One of My Heroes but I know exactly what he means by “dead and gone…still livin’ on.”

Eric Bibb touched us all.  He made us smile, clap, sing, sigh.  I left thinking of the lyrics of one song he didn’t sing last night:

Joy is my wine, love is my food, sweet gratitude the air I breathe.
Advertisement