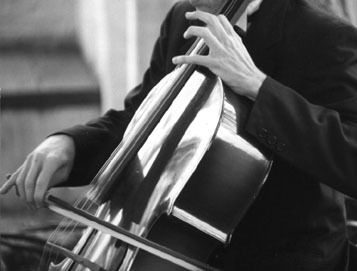 Tomorrow I am playing for a wedding of a young friend of mine.  The bride wanted a string trio sound, but struggled to find string players.  Finally a violin player was found, who in turn found a cellist who had recently moved to a neighboring town 45 miles away.  I fell in love with Virginia, the 85 year old cellist.  She knows most of the repertoire by heart, has a beautiful touch on the cello with none of the prickly pride musicians are known for.

Making small talk upon introduction, I mentioned that I had played the cello when I was young.

“And when I got discouraged and wanted to quit the cello, my father would take me out of school, drive me down to Orchestra Hall and I would watch Frank Miller play the cello with the Chicago Symphony Orchestra.  He was so large – just dwarfed the cello – but his playing thrilled and inspired me to keep on.”

A smile rippled across Virginia’s face.  “I played with Frank Miller.”

“Near North Side.  We had the same grandmother, musically speaking.”

From the Chicago Tribune on the death of Frank Miller in 1986:

“He was called the greatest living orchestral cellist, and no one who followed Frank Miller’s long and distinguished career in American symphonic music would question the legitimacy of that claim.”