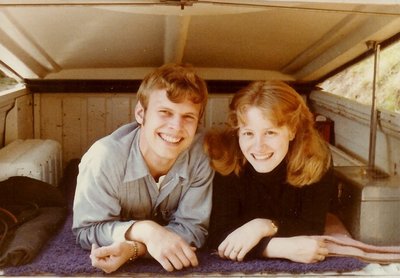 At twenty, I was a young bride.  Granted, early loss and later family friction forced me to grow up in certain ways.  I had been financially independent for three years.  Nevertheless, one of the tacit agreements in our relationship was that my first-born husband would take care of me and I, the youngest in my family, would be taken care of.  Curt was only nine months older than me, but I was younger in many, many ways.  Thus ends the setting of my story.

One Sunday morning [isn’t it always Sunday morning?], three months into our marriage, we had an argument.  Who knows the whys or the wherefores.  We disagreed on some decision, and I was adamant in wanting my own way.  As our little white Toyota pickup drove down Olehanson Road I burst into tears.  Not tears of grief, but tears of thwarted desire.   By the time we turned onto Old Highway 101, Curt had relented, capitulated, backed-off, reversed.

I had hardly finished wiping my face and blowing my nose when I took a few slow, deep breaths. An incipient smile began shaping itself on my face.  Something between a giggle and a chuckle came out of my mouth. What made me say the next words?  Where was the governor of my mouth that moment?

“I can make you do anything I want.”

The words hung, suspended in the cab of the truck, for an eternity.  We were both shocked.

It was a silent, sober and subdued young couple that arrived at church that morning.

I didn’t see myself as a manipulative wench.  I thought I was a loving wife.  But the words said something entirely different.  Curt didn’t recognize the pattern that had been developing until it smacked him in his eardrums.

It was God’s mercy, Kyrie Eleison, that turned the filter off, and let those words tumble out the instant they came into my head.  From that moment, we both knew that things would be different.  I apologized, crying tears of grief this time–grief at my selfish pigheadedness.

In the thirty years of our marriage, we have probably had half a dozen decisions where we strongly disagreed.  We have hashed out our arguments, talked through the issues, supported our positions.  But we have always agreed that the last word was Curt’s, that he, as my husband, was the head.  Several key decisions in our marriage that were initially very painful for me have turned out to be “hallelujahs” in my life, occasions to be thankful for the wisdom of a godly husband.  He didn’t turn out to be a tyrant.  But, thank God, he is not a pansy.

Happy Anniversary, Babe.  You are The Best!

13 thoughts on “The Moment That Changed Our Marriage”