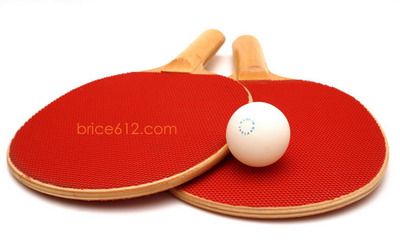 The man I love is an expert in many things; playing ping pong is one of them.   I recently gave him a ping pong table for his (50th) birthday.   Since it’s warmed up enough that we can play comfortably in the garage, we’ve been playing many games.  It’s everybody’s goal to beat Dad/Curt.  Only one person has accomplished this in recent history, Jessie’s 16-year old brother Adam.

Curt, who is left-handed, starts off playing right handed.  He can win 90% of the games this way. If his opponent threatens, he switches to left-handed play and swiftly finishes the game.

A new life goal: to beat my husband in a game of ping pong while he plays right-handed.  I am starting by just trying to improve my personal best record.  Last night I reached 15 points against him.  I think know he’s being easy on me, but he’s too much of a competitor, and has too much respect for me to “let me win”.  He was born a coach with good observation and diagnostic skills.  Along the way, he gives me pointers to help me improve my game.

In a Teaching Company tape about Sir Gawain and the Green Knight Professor Bonnie Wheeler said this about what makes a game (ludus in Latin) a game:

1.  It is played between unequal partners.
2.  A game has rules.
3.  The play is repetitive (my turn, your turn).
4.  The playground is well marked, has boundaries.
5.  The game itself must be uncertain in its outcome.
6.  The players are expected to be deadly serious about their commitment to the game.

I love a little competition in my life.

It’s going to take a while to make #5 a reality, but it’s sure fun working while I play!

When is the last time you played a game of ping pong?

7 thoughts on “Rules of the Game”