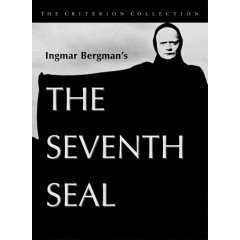 In my search for footnotes (which don’t exist), I found a list of films Cantor recommends.  Here is my severe abridgment of his list.

“Here are the ten best films ever made with a medieval context, ranked approximately in order of merit…

1. The Seventh Seal   Ingmar Bergman’s incomparable masterpiece, set in Sweden at the time of the Black Death, is in a class by itself when it comes to evoking medieval sensibility about life and death.

2. Ran  …based on King Lear…set in medieval Japan…perfectly captures the violence and beauty of the chivalric world.

3. Henry V  …Olivier’s version is much closer than Branagh’s to the ambience of the fifteenth century

4. The Name of the Rose   …wonderful performance by Sean Connery as a Franciscan friar

5. Alexander Nevsky   Sergei Eisenstein’s 1938 film about the prince of Novograd’s fight with the Teutonic knights…fits in well with the iconology of Byzantine and late medieval kingship

6. The Return of Martin Guerre   depicts a crisis in an affluent peasant family in France in the early sixteenth century…the story closely follows the record of a court trial

7.  The Navigator   about half this 1988 science fiction film is convincingly set in a northern English coal-mining village during the time of the Black Death

8.  Black Robe   1990 French Canadian film about Jesuit missionaries among the Canadian aborigines in the early seventeenth century, is fiercely accurate and evocative of an important and underwritten segment of medieval church history–missionary work among the heathens on the frontier.  Think of St. Boniface and the Frisians in the eighth century.

9.  The Gospel According to St. Matthew   …bleakly depicted by the Italian Communist director Pier Pasolini.  The result is much closer to late medieval Sicily than to ancient Judea.

Well, with numbers 1 through 8!

I’ve seen Olivier’s Henry V (I own Branagh’s version and much prefer it)  and I’ve read The Name of the Rose  (perhaps the only George Grant recommendation which I had to push myself to get to the end); the rest are complete mysteries.  For the first time in my life, I’m not frustrated by this kind of list, thanks to Netflix. But convincing my beloved husband to watch some of these with me might be a challenge, especially with daylight savings time in place.

Has anyone out there seen heard of any of these movies?

I’ll start with The Seventh Seal and if it’s any good I like it, my dear reader, I will let you know.

Right here on this blog.