She was describing my grandson, but a memory of my own dad flashed into my mind. He would stand at the back of the chapel, a baby cradled in his arm as he shook hands with folks leaving.  Even though he had carried around seven babies of his own, if there was a baby in the room, he delighted in holding it.

I’m thankful to have grown up in a culture, in a community, in a family that valued, cherished and loved on babies.  I’m thankful now to be part of a community of friends who teach both their sons and daughters to hold their little siblings, to comfort them when they are distressed, to give of themselves to these little ones.  In fact, around our parts it is such a common blessing that it almost goes without notice.

I see the Matthews and the Lukes and the Adams and the Dannys and the Steves and the Gabriels and the Michaels and the Nathans and the Jesses and the Micahs – all those older brothers who comfortably and naturally tote the little tots who are their sisters and brothers.

Because, you see, I was once the little baby who was held and cherished and protected.  I had my own Dave and Johnny and Jimmy and Danny who found joy in carrying me from the car to the house, who picked me up when I was too tired to trudge forward, whose arms went prickly dead while cradling my sleeping form through a church service.

We often think of the nurturing of children as a strictly female occupation.  But there is a particular security in being noticed and graciously treated by a father, a grandpa, an uncle, a big brother.

If I were evaluating a potential husband I would watch closely when he was around children.  Certainly there are different levels of ease depending on how much experience and time he has been around little ones.  But there is a general disposition which will come out.  And a friendly exchange, a playful banter between a three year old and that potential husband would melt my heart faster than a dozen roses or a box of chocolates any day of the year. 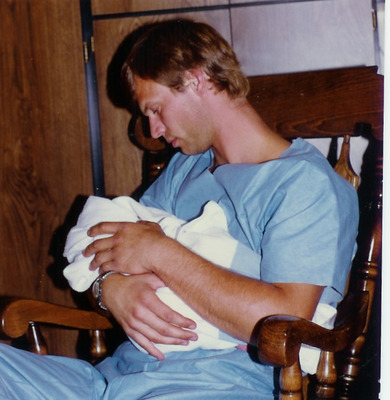 My beloved holding our second son after he cut the cord, etc. 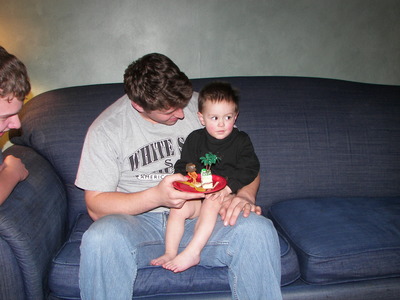 It is such a joy to watch my son as a daddy; he’s one of the best! 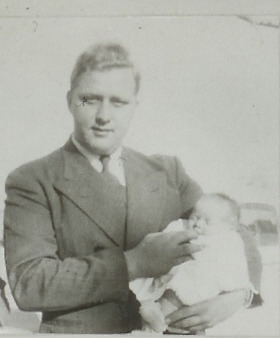