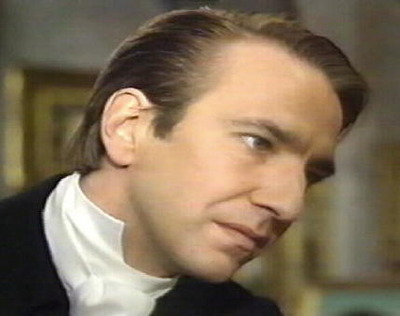 The Barchester Chronicles is a 1982 BBC mini-series adaption of Anthony Trollope’s The Warden and Barchester Towers.  Donald Pleasance does a fine job portraying Septimus Harding, who must be a good guy since he plays the cello.  A young Alan Rickman enters the story in the third episode playing the filmy chaplain, Obadiah Slope.

The pace of the series is agonizingly slow at times, and the style of videography is reflective of both 1982 and the BBC: slow pans, very little background music, single camera shots.  If you are itching for action, watch National Treasure; get the itch out of your system before you sit and savor this slow, sweet film.  With that caveat given, I can rave about this wonderful DVD.

At the heart of the story is “our dear Mr. Harding,” a man who is kind-hearted, contented, and perceptive, a man who is meek in the best sense of the word.  His over-ambitious son-in-law, the archdeacon, is perpetually peeved at  Mr. Harding’s placid response to personal criticism.  “My father-in-law can be a very difficult person,” he complains to his father, the bishop.  To which the bishop replies, “He has persistent bouts of ….Christianity.”

Lawyers and lawsuits occupy the first two episodes.  Twelve bedesmen are persuaded to make a class-action suit against our cello-playing hero, who is the warden of Hiram’s Hospital, an almshouse for aging workers.  One man is loyal to Mr. Harding and tries to talk them out of the suit.

“We wants what’s ours by law!”

“Law!  Never a poor man yet was better for law or a lawyer.  Will Mr. Finney [lawyer] be as good to you as the warden has been? Will he feed you when you’re sick, comfort you when you’re wretched?  Wait ’til you’re all on your deathbeds.  Then cry out for lawyers. See what good it’ll do you.  Law!  Tchah!”

The relationship between our dear Mr. Harding and his younger daughter is a lovely portrait of mutual devotion and respect.  The man who loves this daughter has been cast in an adverserial role to the warden.

Finally, in a tender scene of parting, a benediction given to the bedesmen by Mr. Harding, the loyal bedesman responds, and Mr. Harding’s reply:

“May you live content and die trusting in the Lord Jesus Christ and thankful to Almighty God for the good things He has given you.  God bless you all, my friends.”“I have now to forgive those who have injured me, and then to die.”“That’s all any of us can hope for.”