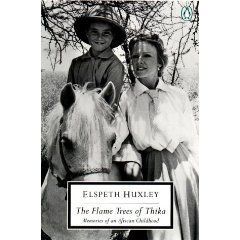 Sometimes she [Tilly, the author’s mother] spoke aloud in my presencewithout exactly speaking to me; I was a kind of safety valve, helpful to her feelings even in a passive role.

Pioneer stories capture me.  I cut my reading teeth on the Little House books; I have a secret desire to test myself in a lifestyle where one has to adapt, work hard, keep cheerful, play with pig bladder balloons and make corn husk dolls for one’s daughters.  Even though I’m a capital W-Wus, I like to secretly preserve the happy fiction that with courage and determination I could survive in the Big Woods.

At such times, when all the furtive noises of the night beyond thatspeck of firelight crept unasked like maggots into your ears, you could feel very isolated and lonely.

The Flame Trees of Thika: Memories of an African Childhood

is an extreme version of the Little House books.  When Elspeth was six her parents, Robin and Tilly, purchased a desolate piece of land northeast of Nairobi, hoping to establish a coffee plantation.  The year was 1913. Naturally, the mores and the customs of the Africans and the Europeans were not in sync.  Robin and Tilly have the friendship of other colonial settlers, but have to learn how to operate their “farm” with the native workforce they’ve hired.

Tilly was downcast; as with all perfectionists, it was the detailothers might not notice that destroyed for her the pleasure of achievement. I doubt if she was every fully satisfied withanything she did.  But she breasted each failure as a dinghy rides a choppy sea, and faced the next with confidence and gaiety.

Flame Trees differs from Little House in that you never fully hear the author’s childhood voice.  No other children appear, she never calls her parents Father and Mother and curiously Elspeth-Huxley’s first name- is never once mentioned, nor is a pet name like Half-Pint.  She has an exotic story, but Huxley’s prose made this book.  Rich, delightful, capable of expressing universal responses:

This declaration put a full-stop to the conversation, as Hereward’s remarks were apt to do, whereaswith Lettice and Ian, or Robin and Tilly, talk wouldvolley gently to and fro until halted by some external event.

One story line, told with tact, of neighbor Lettice’s infatuation with Ian (as in not-her-husband) and the resulting tension, would never be included in Laura’s world.

“[Shooting] is much less alarming when you fire [the gun] off
yourself than when other people do,” Tilly explained.

“What sorts of sins?”

Naturally, a book set in Africa will have mosquitoes and mosquito nets:

No sound concentrates so much spitefulness and maliceinto a very small volume as the pinging of mosquitoes,as if needles tipped with poison were vibratingin a persistent tattoo.
I thoroughly enjoyed The Flame Trees of Thika.  I have half a dozen Africa books in my Read Around the World plan, and I am eager to compare this book with others on my list. 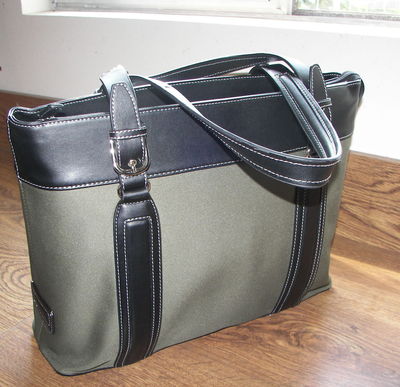 Do you like my new laptop tote?
It’s kind of cute, eh? 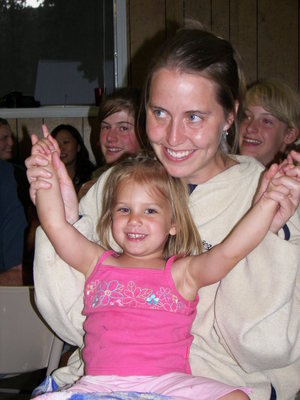 Katie, a family member by love instead of blood,
(meaning we’ve adopted each other as family)
is going to Kenya to work as support staff
at a Trauma Healing Conference.

Representatives from more than 15 African countries
will get training to help those who have been through
war, natural disasters and other traumas.

Katie spent her childhood in Zimbabwe.
She has been back to Africa multiple times.